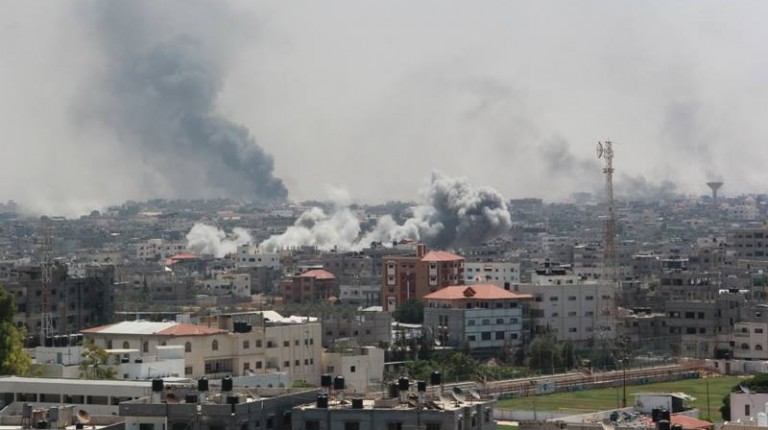 Israel and Palestinian factions in Gaza observed less than three hours of a humanitarian ceasefire on Friday morning before both sides resumed fighting that has killed more than 1,400 people since it began over three weeks ago.

The Israel Defense Forces (IDF) said: “Hamas fired at our forces in [South] Gaza in violation of a ceasefire. We suspect that an IDF soldier was kidnapped moments later”.

The latest attempt at bringing the warring sides to negotiate a settlement in Cairo fell apart after Israel responded to rockets fired from the Gaza Strip by shelling the town of Rafah in the south of the Palestinian territory. The Palestinian Ministry of Health in Gaza said that at least 35 had been killed and 100 injured as a result of the shelling. The ministry said the numbers are expected to rise as the “search and salvage operations are still on-going”.

Israeli and Palestinian delegations had been invited to Cairo to engage in negotiations as part of the 72-hour ceasefire deal that also allowed for the presence of IDF personnel in Gaza to destroy tunnels leading into Israeli territory. Palestinian news Agency MAAN reported that Egypt had rescinded the invitation for talks following the collapse of the ceasefire agreement.

Egypt’s invitation to the warring sides came after the UN and US announced on Thursday night that they had received assurances from both sides. Kerry said on Thursday that the US “will be sending a small delegation to Cairo to assist and take part in these negotiations”.

The Palestinian Ministry of Interior reported heavy shelling east of Rafah less than three hours after the ceasefire began. Israeli officials said the shelling was in response to a “serious incident in Kerem Shalom [that] resulted in Israeli casualties”.

Egypt’s internationally endorsed ceasefire initiative of 14 July continues to be the basis for a longer standing ceasefire despite being rejected by Hamas, which claims it was not formally approached to participate in the agreement.