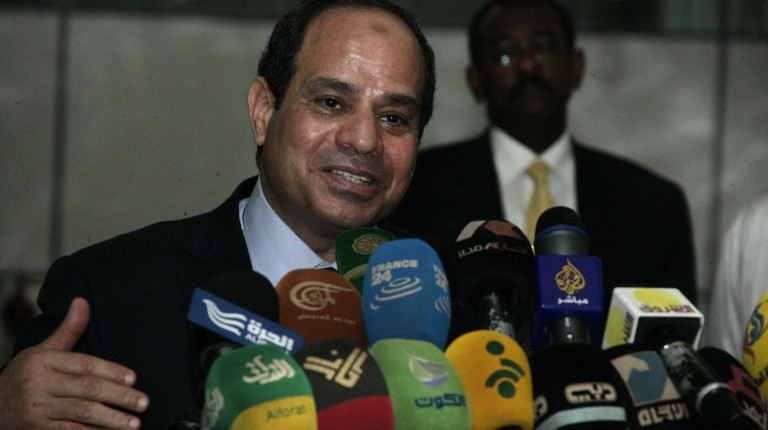 President Abdel Fattah Al-Sisi said on Saturday that Egypt’s initiative for a truce between Palestinian factions and Israel in the Gaza Strip is a “real chance to find a solution” to the conflict.

Speaking at a joint press conference with Italian Prime Minister Matteo Renzi, Al-Sisi said there is “no alternative” to the Egyptian proposal, a sentiment shared by the Italian who stressed his nation’s support for the plan.

Al-Sisi stressed that the initiative is “capable of opening doors” for longer lasting solutions to the situation in the Gaza Strip, home to 1.8 million Palestinians. The Strip has been under an Israeli enforced air, land and sea blockade which includes Egyptian control of the southern Rafah border crossing.

Hamas rejected the Egyptian proposal, which was announced on 14 July, saying that it was not officially approached to participate in the agreement. The group has also said it would not accept a ceasefire that does not include the lifting of the blockade.

A Palestinian delegation led by the Palestinian Authority, and includes five Hamas and two Islamic Jihad representatives, is expected in Cairo on Saturday following an invitation from Egypt to further efforts for a lasting ceasefire. The invitation was also extended to the Israeli side as part of a United Nations and United States sponsored a 72-hour humanitarian ceasefire deal, which lasted less than three hours on Friday. UN Secretary General Ban Ki Moon and US Secretary of State John Kerry had hoped to use the 72-hours to secure a lasting ceasefire. The Egyptian foreign ministry confirmed on Friday that the invite to Cairo is still valid for both sides despite the collapse of the ceasefire.

The Israel Defense Forces suspects that one of its soldiers, 23 year-old Hadar Goldin, was captured by Hamas, although the group denies the accusation. Hamas spokesman Sami Abu Zuhri said on Friday the accusation is an attempt by Israel to “mislead” and “justify backing away from the truce and cover up the brutal massacres, particularly in Rafah”.

Kerry demanded the release of the soldier and called on “those with influence over Hamas to reinforce this message”. Turkey and Qatar both have ties with the group and the foreign ministers of the two countries have sought to use their influence over the group to reach an agreement. Much of Hamas’ leadership is being hosted in Doha.