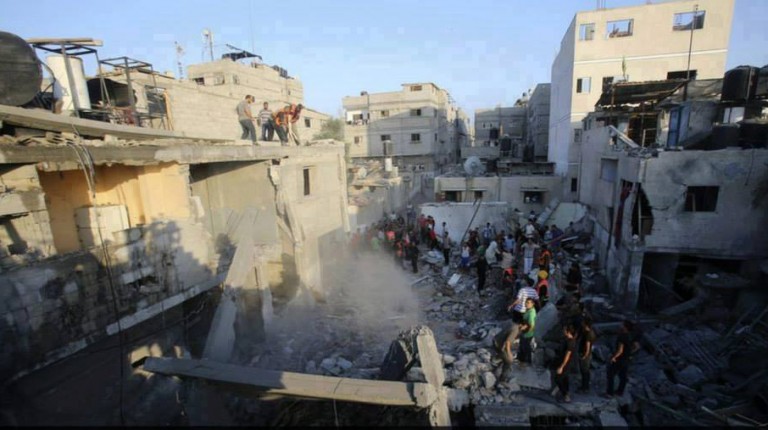 The Israel Defense Forces (IDF) announced that its ground troops have withdrawn from the Gaza Strip 20 days after a ground offensive was launched in the densely populated Palestinian territory.

The move comes as part of a 72-hour ceasefire deal brokered by Egypt, which began at 8am on Tuesday. Egypt’s foreign ministry announced the deal on Monday night following two days of talks between Egyptian intelligence officials and a cross-faction Palestinian delegation.

IDF troops “will maintain defensive positions near the Gaza border” for the duration of the ceasefire, said a spokesperson via social media. A member of the IDF media office said: “the operation not over, there is a ceasefire for now” adding that “all the tunnels we know about have been destroyed”. Israeli troops had been ordered to search for and destroy tunnels used by Hamas to carry out operations inside Israel.

As part of the deal Egypt is set to receive “high-level delegations from the two parties for the implementation of the Egyptian initiative”. This is the second call for delegations to travel to Cairo for talks; the Palestinian delegation arrived on Saturday evening for talks but the Israelis did not send representatives following the collapse of a United Nations and United States-sponsored 72-hour humanitarian ceasefire last Friday. Israel and Hamas both blamed the other for breaching the agreement that lasted less than three hours.

Paul Hirschson, a spokesman for the Israeli foreign ministry, said that while he was not aware of a specific timeframe for the talks, he expected and Israeli delegation “to speak with the Egyptians” in the “immediate future”.

Hirschson said the “start of a conversation about a future relationship with the Palestinian people” is one action during the 72-hour ceasefire, the other being that “humanitarian aid will be able to reach the appropriate destinations” inside Gaza.

The spokesman said that Israel is “interested in a relationship with the Palestinian people”, adding that Hamas has been “an obstacle to that”.

Turkish Foreign Minister Ahmet Davutoglu said on Tuesday that he received confirmation from Hamas leader Khaled Meshaal “that the ceasefire is being implemented”.  He added: “Our teams on the ground make every effort for the reconstruction of Gaza and the normalisation of life in Gaza.”

Ezzat Rishq said the truce “was on the basis of the Palestinian demands approved by the Palestinian delegation and handed to the Egyptian side” on Monday evening, according to a Hamas statement. The group’s foreign relations official Osama Hamdan stressed: “We are committed to the truce as long as Israel is committed not to violate it.”

The Palestinian delegation announced on Sunday that they had a come to a “unified Palestinian position on a ceasefire in Gaza”. Conditions put forward included Hamas’ main demands of the full withdrawal of Israeli troops and lifting the air, land and sea blockade on Gaza that has been in place since 2007. Other conditions include the extension of Gaza’s maritime fishing zone, the release of prisoners and reconstruction of the strip funded by an international donor conference under the supervision of the national unity government formed earlier this year.

Hirschson said the talks are “subject to Hamas not violating the ceasefire”, adding that there is low level of trust in Hamas, pointing to the collapse of previous ceasefire agreements that Israel blame Hamas for violating.

The talks in Cairo are to be “indirect”, according to Hamas, and will be based on Egypt’s initial ceasefire initiative presented on 14 July. Israel accepted the agreement but Hamas rejected it, claiming it was not officially approached by Egypt to participate in the agreement.

Hamas’ relationship with Cairo deteriorated over the last year following the ouster of former President Mohamed Morsi, a member of the Muslim Brotherhood in which Hamas has its roots. In March 2014 an Egyptian court banned the activities of Hamas in Egypt and ordered the seizure of the group’s assets.