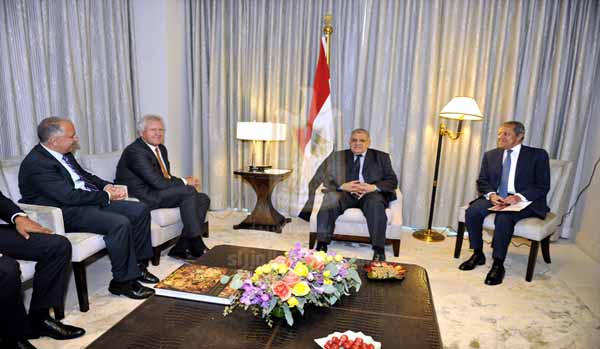 United States Secretary of the Treasury Jack Lew said that the United States supports economic reform programmes in Egypt during his meeting with Prime Minister Ibrahim Mehleb on the sidelines of the US-Africa Summit currently held in Washington.

The programme includes 10 main components, the most prominent of which include restructuring subsidies, enacting administrative reform, establishing an investment plan and reforming investment laws.

President Abdel Fattah Al-Sisi praised the lack of popular protests against the economic reform plan during a speech weeks ago. The plan included price hikes for electricity and petroleum products, and US Secretary of State John Kerry also praised Egyptians’ ability to bear these circumstances.

In a statement published Tuesday, Mehleb said that he presented opportunities to the Treasury Secretary to participate in finance and business sessions during the donor conference currently convened by Egypt. The projects are expected to be launched before the end of this year or the beginning of 2015 so that Egypt can begin to reap the benefits of massive development plans presented at the conference.

On Monday, Mehleb met with the Lew at the Treasury headquarters in Washington, DC while participating in the US-Africa Summit in the presence of Egypt’s finance minister.

“Egypt is rich in terms of economic and human resources and holds many investment opportunities that could be rediscovered,” Mehleb said. He emphasised that despite the internal and external challenges faced by Egypt, the country is able to respond to the challenge. Maintaining stability represents a significant obstacle for Egypt now, he added.

“The reforms that Egypt has undertaken recently will be matched with social and economic measures to achieve a balance between economic goals and avoiding harm to those with limited incomes,” said Mehleb.

Mehleb arrived in Washington on Monday with an Egyptian delegation visiting the United States in order to participate in the US-Africa summit as per an invitation by US President Barak Obama.