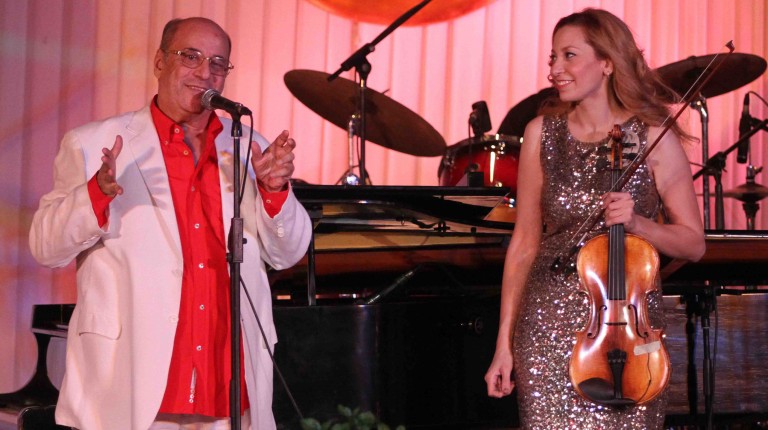 The month-long Summer Festival is set to attract both young and old almost every day from 5 August till 5 September, which has become a fixture on the cultural calendar. It is also an ongoing success story since the opening of the Cairo Opera House in 1988, Waleed Emam, Director of Public Relations Department at Cairo Opera House.

Couples in elegant evening gowns next to more casually dressed groups of friends enjoyed the performance of Yehia’s band, singing along to the familiar Egyptian film soundtracks composed by Gamel Salama.

“I enjoyed performing with Salama because in my eyes he is one of the best composers we have in Egypt” said Ranya Yehia, sister of Rasha Yehia and a flutist at the Cairo Opera Orchestra.

Salama composed the song “Saidi” especially for the star of the evening, Rasha Yehia, who said it was an emotional moment for her and the composer when the song was played.

The festival takes place at the Open Air Theatre in front of the backdrop of Cairo Opera House. From classical Arabic oud-concerts and chamber music to contemporary Egyptian bands and jazz singers, there is something to suit everyone’s musical taste.

“We have very talented, great artists to perform this year” said Emam promising unforgettable evenings with great shows and entertainment.

The highlights of this summer will be the talented duo of Dina Abdel Hamid and her husband Ghassan El-Yusef celebrating the classical oriental lute (el-oud) on 8August. There will also be outstanding jazz musician Ahmed Rabie on 13 August and a classical music concert on 1 September by Al-Ahlam Ensemble and singer Ahlam Ahmed.

In addition to the genre-mix at Summer Festival the Opera House also focuses on more classical sounds and music at their Classical Festival starting August 25th till 4th of September at Salah El-Din castle.

Ticket costs vary from EGP 15 to EGP 30 and are available at the Cairo Opera’s ticket counter in Zamalek.