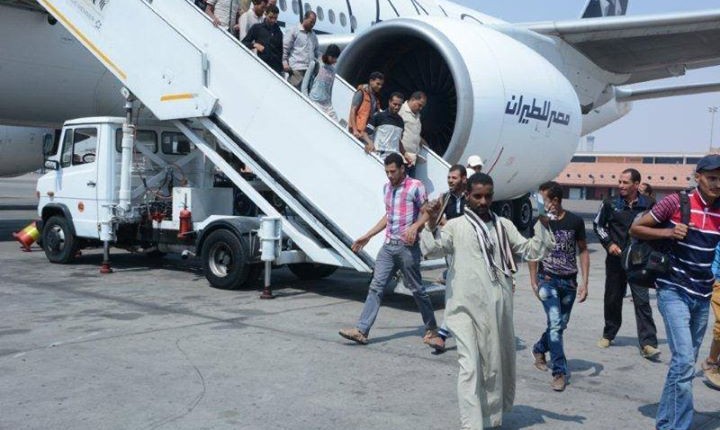 The emergency airlift set up to evacuate Egyptians from west Libya through Tunisian airports was removed on Sunday morning, after 46 flights carrying Egyptians home.

Minister of Civil Aviation Hossam Kamal was cited by state-run Al-Ahram as saying that the airlift succeeded in returning most Egyptians who were at the Ras Jdeir border crossing, which lies at the Libyan-Tunisian border area.

He added that 11,500 Egyptians had been returned to Egypt, as of Saturday night. An additional 200 were expected Sunday morning, before the airlift was removed.

Egyptians who were stuck in the border area were evacuated by first crossing into Tunisia through the Ras Jdeir crossing, from which they are taken to the Gabès or Djerba airports. They were returned home by free flights provided daily by Egypt’s national airline EgyptAir.

Egypt has been engaged in intense communication with officials in Tunisia to evacuate the Egyptians at the border area. Tunisian authorities announced a set of measures to facilitate the evacuation of Egyptians, including exempting them from paying fees to cross into Tunisia.

Foreign Minister Sameh Shoukry visited Tunisia last week, where he held talks with the Tunisian prime minister and an array of Tunisian ministers, before visiting the Ras Jdeir border crossing.

Recent fighting in Egypt’s restive neighbour Libya has rendered the roads leading to the border area with Tunisia unsafe.

Libya hosts an Egyptian community of 1.6 million, according to Libyan Ambassador to Egypt Mohammed Fayez Jibril. Last week, the Egyptian foreign ministry urged citizens to avoid going to the Tunisian border and to avoid being in places close to military action.

Heavy fighting has dominated Tripoli and Benghazi for weeks. A deadly standoff between rival militias at the Tripoli Airport led to its closure since 13 July and prompted the evacuation of the United Nation’s staff from the country shortly afterwards.

Violence in Libya has been a major concern for its neighbours. Cairo is expected to host a meeting for representatives of Libya’s neighbouring countries to discuss the approval of “a number of ideas, recommendations and a set of proposals in solidarity and support for the Libyan people”, according to the foreign ministry.

On 14 July, Libya’s neighbours decided to form a security committee and a political committee to offer the troubled country help to end its crisis, following a meeting in Tunisia.