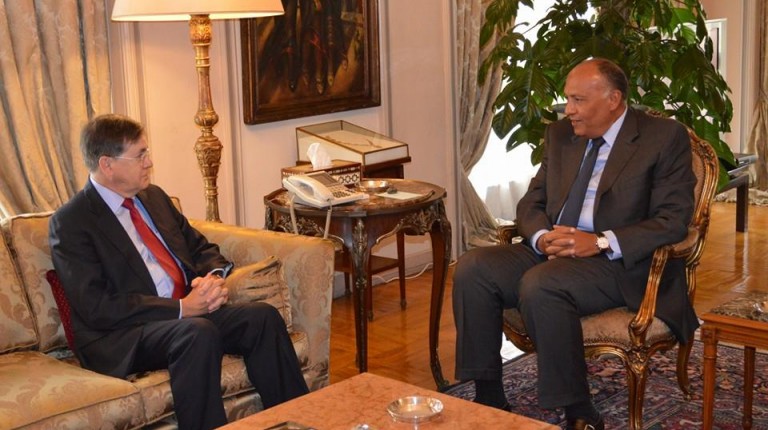 Satterfield showed great interest in Egypt’s stance on the situation in Libya, according to a Sunday statement by the Ministry of Foreign Affairs, given Egypt’s position as one of the main actors in the region.

Shoukry expressed Egypt’s keenness to achieve the aspirations of the Libyan people in building a modern state and preserving its territorial unity. He stressed the need for the international community to coordinate with neighbouring countries to achieve stability in Libya.

Satterfield was appointed US envoy to Libya in May following the escalating violence in the North African country. He is also director general of the Multinational Force and Observers (MFO) tasked with safeguarding the peace treaty between Egypt and Israel in Sinai.

Rival Islamist and non-Islamist militias have had a firm hold on Libya since the overthrow of former president Muammar Gaddafi, but violence escalated drastically in May when General Khalifa Haftar, in defiance of the Libyan government, declared he would root out “terrorism” in Benghazi.

Satterfield meanwhile expressed his appreciation for Egypt’s efforts to broker a ceasefire between Israel and Hamas, the statement said. Since Israel started its “Operation Protective Edge” on 8 July, Egypt has adopted the role of peace-broker, despite its strained relation with the Palestinian faction Hamas, of which activities are banned in Egypt.

The US diplomat welcomed the cooperation Egypt provides to the multinational force in Sinai monitoring the 1979 peace treaty between Israel and Egypt. Satterfield said Western countries have the “strong desire” for Egypt to continue its support for the mission, and stressed the important role the Egyptian armed forces have in achieving stability in Sinai.