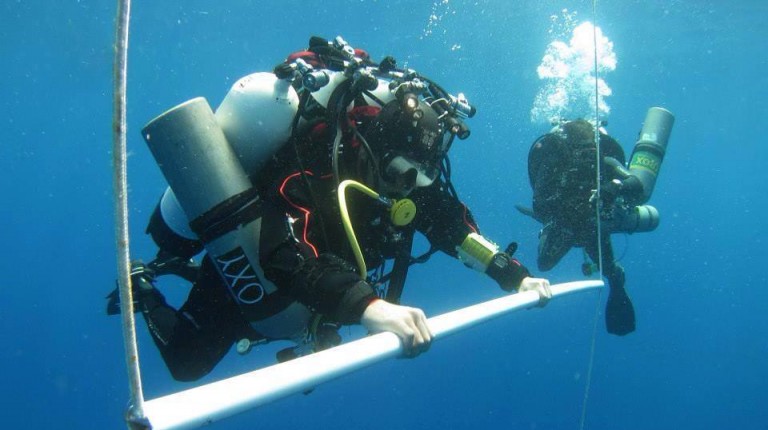 As an 8-year-old boy, watching to TV show “The Marine World”, Ahmed Gabr liked to imagine himself deep in the blue sea pictured on the screen, surrounded by colourful corals and fish.

Now 38 years old with 13 years of diving experience under his belt, Gabr hopes to dive deeper than anyone has before. In Dahab in September, Gabr will attempt to break the world record by completing a 350 metre dive.

Under high depths, divers face risks of high-pressure nervous syndrome, a neurological disorder that divers might suffer from under depths of 150 metres leading to tremors, disturbed vision along with other neurological problems. Another risk divers face is isobaric counter diffusion, which causes breathing difficulty to the diver.

Despite the risks, Gabr said he is willing to act as a “lab rat” in order to prove that a human can survive under such depth.

“One mistake costs a life,” he said. “But I’m confident that it will happen.”

Gabr has two more training dives before he attempts to break the record.

Going through such an experience requires psychological stability and high decision making skills to know when to go back if something goes wrong, he said. His good habits have made him lead a healthy life, and being healthy will hopefully help him survive under high depth.

As a “fighter who has always been pushing limits,” Gabr gains more confidence with every dive he does, he said.

Although Gabr, fascinated with the sea, has dreamed of becoming a diver since he was a child, he didn’t enroll in his first diving course until he was in college. His family could not afford the expenses of such an “uncommon” sport in Egypt at that time, he said.

It didn’t take him long to go pro, however. By age 18, he had started his career as a diver. Gabr then became a diving instructor and now he also trains instructors.

The diver has been aiming to break the world record for four years. A year ago, Guinness records accepted his application.

“A lot of people tried to put me down,” he said. “But I learnt how to decide the right time to shoot the bullet.”