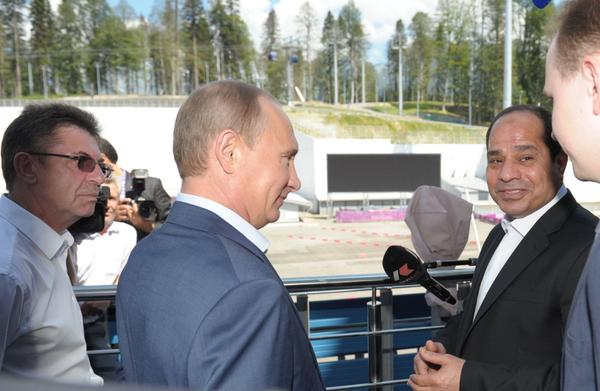 Egyptian President Abdel Fattah Al-Sisi arrived in Sochi on the coast of the Black Sea on Tuesday at the invitation of Russian President Vladimir Putin to strengthen ties between their two nations that have been warming steadily over the past year.

Putin will host Al-Sisi for two days, during which the pair is set to discuss “the latest developments in the [Middle East] region and bilateral relations”, according to Egypt’s State Information Service. They are expected to focus on the situation in the Gaza Strip, Iraq, Libya and Syria.

“The views of Russian and Egyptian about Middle East issues coincide to a large degree,” said a statement from the Kremlin ahead of Al-Sisi’s arrival. The Kremlin pointed to “the need to stop the violence in the Gaza Strip and the settlement of crises in all of Libya, Iraq, Syria, and the fight against terrorism”.

Putin and Al-Sisi spoke by telephone on Thursday last week, and the pair “confirmed their mutual interest in further advancing the comprehensive mutually beneficial cooperation”, while Putin praised Egypt’s role in facilitating indirect talks between the Palestinians and Israelis.

The Kremlin confirmed that the two presidents will discuss ways to “coordinate the positions of the two countries on the international stage in the future”.

As well as exchanging views on the Middle East’s various crises, Putin and Al-Sisi are also expected to engage in discussion on the “development of economic and trade relations” as well as in the sectors of tourism, “education, culture and science”.

Putin and Al-Sisi have sought to strengthen ties even before the latter had been elected. In his role as Egypt’s defence minister, Al-Sisi participated in an exchange of visits between Cairo and Moscow along with the Egyptian and Russian foreign ministers. They participated in two rounds of four-way meetings, or a 2+2 format, in both Cairo and Moscow.

During the return visit to Moscow Putin endorsed Al-Sisi’s presidential bid before he had officially announced his intention to run. Putin also congratulated Al-Sisi on his landslide victory before the official results had been announced in early June.

The relationship between Egypt and Russia began to strengthen towards the end of 2013, the same time as Egypt’s relations with the United States worsened, culminating in the suspension of US military aid to Egypt pending democratic progress. This prompted rumours of an arms deal between Egypt and Russia that never came to fruition. The foreign ministry insisted that it was not replacing one power with another but rather broadening Egypt’s foreign relations.