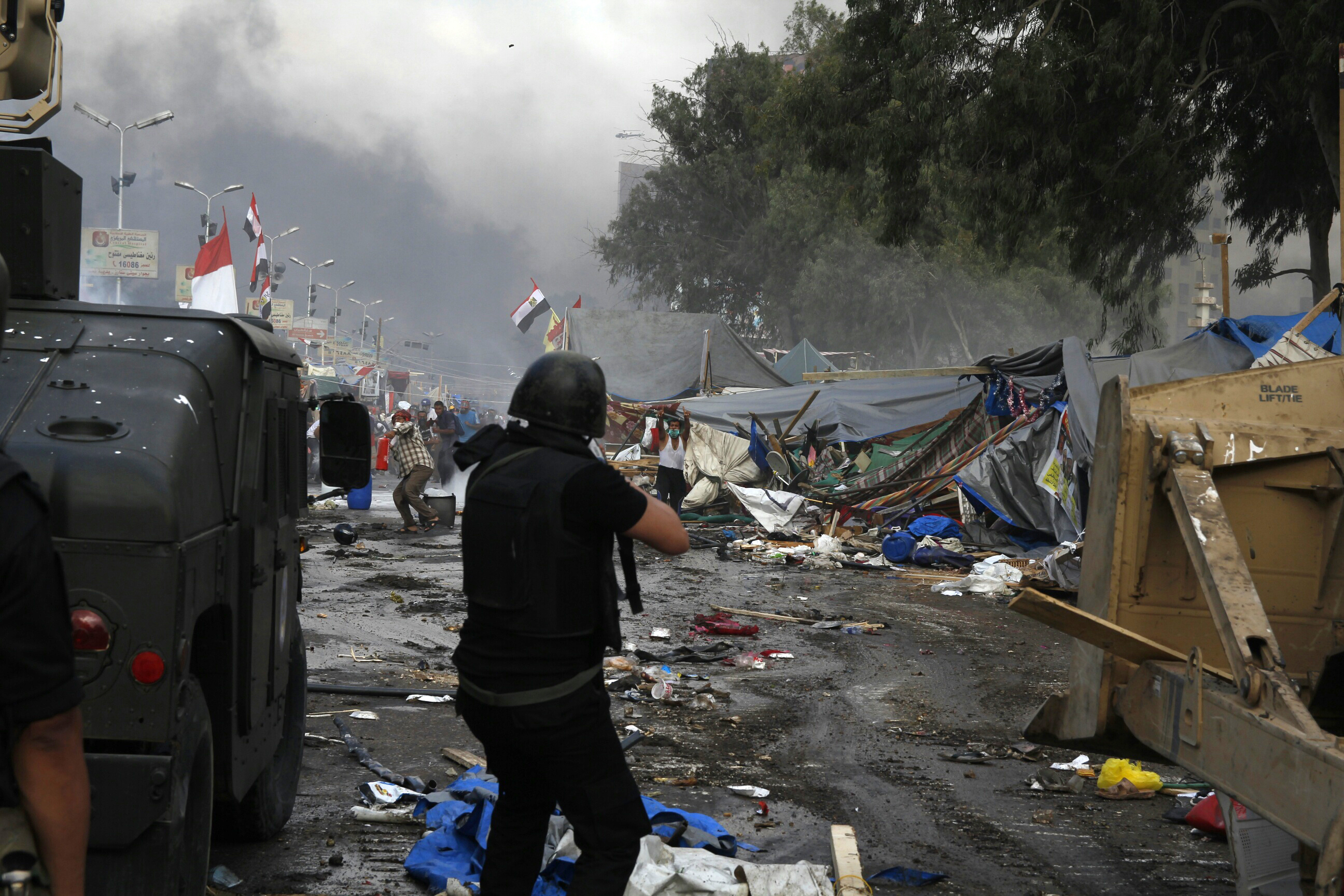 Human rights remain a controversial issue in Egypt, especially in the current political climate. Since 2011, the country has witnessed numerous violations by both official entities and civilians.

In the aftermath of the ouster of Islamist president Mohamed Morsi in July 2013, in particular the forcible dispersal of sit-ins at Rabaa Al-Adaweya and Nahda Square, the country witnessed violent confrontations, leaving thousands dead and wounded in just six weeks. Excessive force was used by the state, in some cases by armed protesters and militant groups. Also, hundreds have been detained and given harsh sentences, including female students, journalists, and protesters.

The National Council for Human Rights (NCHR), an independent national institution formed by the government in 2003, released last March its full report on the forcible dispersal of the pro-Mohamed Morsi sit-in at Rabaa Al-Adaweya Square. The council had formed a fact-finding committee in September 2013 to look into the forcible dispersals, and to investigate violations of human rights.

Daily News Egypt interviewed Nasser Amin, NCHR member and general director of the Arab Center for the Independence of the Judiciary and Legal Profession, to reflect on some of the main issues related to human rights in Egypt.

As the anniversary of the dispersal of the Rabaa Al-Adaweya and Al-Nahda squares is approaching, how has the fact-finding committee gathered information about the dispersals? And what steps did the committee take to produce its report?

Firstly, based on the decision of the NCHR, a fact-finding committee of 15 researchers was formed to dig deep and find out what happened during and after the dispersal [of Rabaa Al-Adaweya and Nahda sit-ins], and to make sure whether the security apparatus followed the international standards of human rights.

Second, the council also approached political groups who had participated in the sit-in, such as the Anti-Coup Alliance, the Freedom and Justice Party (FJP), the Nour Party, and the Building and Development Party.

Third, the council held hearings for journalists and media personnel who participated in covering the events. The fourth approach was examining reports by Egyptian civil society organisations. Finally, the last approach was conducting fieldwork and interviews with eyewitnesses of the dispersal and the events that followed.

Afterwards, a separate examination of the produced information took place, according to the international standards of research and fact finding.

The Human Rights Monitor pointed out that the report was written by researchers who could have showed their bias in the investigations. Also the report was criticised for not mentioning the role of the armed forces in the dispersal. Do you have any comments on such statements?

Upon choosing the researchers for the fact-finding committee, we [emphasised] that all participants should abandon all political bias when investigating the events. And as an extra caution, all produced information and reports were heavily revised by the council members.

As for the armed forces issue, according to our committee there is no solid evidence that troops from the armed forces participated in the process of breaking into the squares and confronting the protesters. The army only secured the perimeter of operations, while fighting forces from the Ministry of Interior cleared the squares.

The report mentioned that the NCHR did try to obtain the MOI plan of dispersal. Was there a reason for this?

As a fact-finding mission, we expect that all the sources and bodies will refuse to share information and facts with us. Hence, our objective was to investigate what the other does not want to reveal. Indeed, the council had not gained access to the Ministry of Interior’s plan for the dispersal, but rather deduced it from the line of events and testimonies.

According to the NCHR report more than 600 people died on 14 August, who do you think bears primary responsibility for such a high loss of life?

Both the high ranking officials from the security forces responsible for the implementation of the square evacuation, and the high profile leaders of the Muslim Brotherhood and the sit-in administration who allowed the entry of weapons and didn’t inform the peaceful protesters about the presence of such weapons.

Last Tuesday the Human Rights Watch team was barred from entering Egypt. They were going to present their findings. What is your comment on this incident? And how important are the findings of such groups to your fact-finding committee?

Human Rights Watch is a respectable organisation. Banning it from entering the country was an improper decision. This should not have taken place. The organisation’s directors have the full right to reveal their report on the Rabaa Al-Adaweya dispersal. Only when this takes place, official and independent bodies should have the right to respond and comment on their report.

I am aware that HRW produced a report on the dispersal, however unfortunately I haven’t had the chance to go through it yet.

Do you think there could have been a way for the police to spare more lives?

Absolutely. The performance of the police could have been better, and experts should have been consulted when constructing the dispersal plan. Also the report mentions other recommendations that should have happened such as giving the protesters enough time to leave the sit-in, specifying the time of the dispersal and announcing it to the protesters, as well as providing safe exits for the peaceful demonstrators without subjecting them to any harm. As for the security forces, the continuous training of the paramilitary anti-riot police on relevant international standards for the use of force by law enforcement officials is extremely necessary.

I believe there have been attempts to end the sit-in peacefully through negotiations, however they obviously failed for reasons I am personally not aware of.

The NCHR has recently dedicated time to visit prisons. What has the council found?

Egypt is still suffering a considerable problem in its penal institutions such as police stations and prisons. These institutions are in urgent need for far-reaching changes and reform as well as subjecting them to international standards when it comes to the treatment of inmates and detainees.

Nevertheless, this cannot be accomplished unless these institutions are subjected to continuous supervision, especially in police stations where most of the incidents of torture and deaths are reported.

Critics say that police torture and abuse in police stations are on the rise, and that torture is a systematic approach of Egyptian police officers. Is this consistent with your general observations?

In Egypt, torture is used as a tool for criminal investigation. This takes place due to the absence of technological and scientific methods to investigate crime, which demonstrates lack of training and capabilities. Hence, [the police] always resort to violence to extract information instead of using modern methods.

Torture has been existent in the country for decades now. Egyptians courts have been receiving cases of torture since the 1930s. Thus, it is an abundant phenomenon to the extent that we can call it systematic. A solution to such a problem is a national congress where the state and civil society institutions participate to combat this epidemic-like phenomenon, by making legal amendments that would criminalise such actions and by subjecting detention centers to legal supervision, and also to begin immediately with training police personnel, especially in the areas of Criminal Investigation, on relevant international standards for the use of force by law enforcement officials.

You spoke about police stations; what about prisons?

Prisons are relatively more stable, unlike police stations, which witness consistent movement of detainees. Legally, prisons are run by the Ministry of Interior, however they must also be supervised by the general prosecution. This, unfortunately, does not happen as the prosecution is always occupied with legal and investigative actions, leading to the possibility for violations to take place.

In Sinai a vicious war is taking place between security apparatuses and militant groups in the absence of sufficient independent media coverage. Are you concerned about human rights violations?

Not having access to information is one of the most critical issues that we face. The Egyptian state has declared war on terrorism in Sinai against militant groups. The state has every right to do so, however it is our right as citizens to know what is happening there. Plus, it is the right of the Egyptian population to make sure that human rights are taken into consideration during the fight against terrorism.

What is the biggest human rights challenge for the Al-Sisi administration moving forward?

The biggest challenges the administration faces now are the extreme and intimidating anti-terror rhetoric used by the media, and relying only on a police apparatus that has not witnessed any development in its strategies concerning human rights. Another challenge is the separation between fighting terrorism and maintaining human rights.

When a country is waging a war against terror some rights are not maintained. In Egypt, state institutions are taking only one direction which is fighting terrorism, while lacking the sufficient tools that protects human rights, supported by an aggressive media machine that is producing a rhetoric that sometimes justifies violating human rights.

There has been a lot of criticism of the protest law. Do you think it is consistent with the constitutional right to protest?

The current Protest Law is void and was amended at the wrong time. I believe that some of its articles are being pleaded against in front of the Egyptian court for being unconstitutional. We in the NCHR asked the President of the Republic to reconsider the law, and we also presented an alternative version.

Following the latest verdicts on the Muslim Brotherhood group members, can we say that there is an independent judiciary in Egypt?

The problem exists within the very judicial system, which makes it non-confirmative to the UN’s basic principles on the independence of the judiciary.

Was the NCHR pressured during or after the release of the Rabaa Al-Adaweya report?
Human rights organisations are always subjected to criticism from all sides. For many of these organisations, such criticism means success. This is obvious as the standards upon which these organisations operate might clash with the interests of different entities, official or independent. The NCHR was subjected to a lot of criticism; however this did not affect the council or pressured it to deviate from using the international standards of human rights.

Some voices are now calling for reconciliation between the Muslim Brotherhood and the Egyptian state. Do you think this is possible?

In my opinion, reconciliation should not take place unconditionally. Rather reconciliation should occur in the scope of sophisticated steps of transitional justice, such as revealing the truth about what happened in the past, referring all those who were involved in the deadly violence to court, compensate the victims, and guaranteeing that such violations won’t happen again.