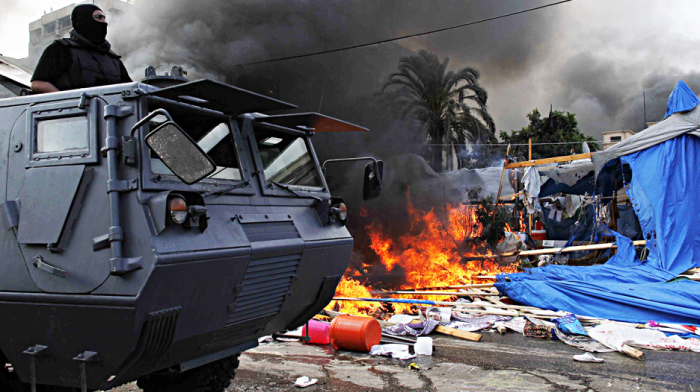 In the above quote, a nineteen-year-old girl is recalling the massacre she lived though on 14 August 2013, when police and military forces forcibly dispersed two sit-ins in Rabaa Al-Adaweya and Nahda Squares. The forces called them fad qanoony , a “legal dispersal,” and what Human Rights Watch (HRW) called “the most serious incident of mass unlawful killings in modern Egyptian history”.

The incident was the most brutal of its kind, but it was not the first time the Egyptian state committed a criminal mass killing. Since 25 January, many have occurred including the July sit-in, Maspero, the Cabinet of Ministers, Mohamed Mahmoud, Port Said, Abbaseya, Itahadeya Palace, Rabaa Al-Adaweya, Nahda, Ramses, 6th of October City (and many other that are unknown and disregarded because they are outside of the main cities). All are place names and dates that have been given meaning connected to memories of public displays of mass murder or extreme violence. Bodies have been publicly run over by tanks, thrown into the trash, or set on fire.  These places become symbols and obtain meaning. With each passing massacre, the state killed more people.

In all cases, the state had a monopoly over how to define “Egyptian-ness”, it determined who would be the other, and who was seen as the enemy at each particular moment in time.  As it defines “Egyptian-ness,” the state also defines and determines who is to be hated and loved.

A little child once asked a friend of mine who was covering a protest whether he was “Egyptian or Ikhwan”, because by then, according to the standards set by the state, one could not be both. Those who are othered are thus undeserving of compassion or sympathy; if they have to be killed for the sake of the nation then so be it.  On the other hand people have strong feelings towards the state, which they view as the provider of amn and aman, security and safety. As Talal Asad writes, killing “others” is thus necessary for the security it provides; we are killing the terrorists to keep ourselves safe. In any case, the state constructs an other out of anyone opposed to it. This is also why discourse paints the binary that anyone opposed to the state is constructed as an ikhwan. On the other hand, with the construction of the idea that the nation needs to be “saved”, citizens of the nation are thus readily available to join the army, to kill and be killed, for the sake of the nation.

When Egyptian security forces went into Rabaa Al-Adaweya with armoured personnel carriers (APCs), ground forces, bulldozers, and snipers, police and army personnel, they killed over 1,000 people, by Human Rights Watch’s count. However, many were unfazed by the violence, and claimed that the state only killed “Islamist terrorists” that deserved what they got. In February 2012, the Egyptian Security Forces watched as over 70 Al-Ahly football fans were massacred. This didn’t matter much; they were “football hooligans.” On 9 October 2011, the Egyptian army massacred 28 people in a fifteen minute time span. Again, people did not mind as they saw those that were killed as “Christians conspiring against the state and Islam”, and they deserved it. When the military dispersed the Abbaseya sit-in, people dismissed it saying the protestors were “Hazem Abu Ismail Salafi supporters”.

Social theorists point to several prerequisites for mass killings. They do not merely appear on the scene, but they evolve, in the sense that certain social-structural, political-economic, and cultural and psychological prerequisites are necessary. Mass killings are often preceded by declines in economic conditions, political disorganisations, social upheavals, and so on. They also evolve in terms of the extent of brutality used by the killer, which again is the Egyptian state in most cases.

Likewise, the road to physical violence is often paved through symbolic violence which Pierre Bourdieu defines as “violence which is exercised upon a social agent with his or her complicity.” It comes about, in that sense, when agents take the world for granted, accept and find it natural. Bourdieu calls this “misrecognition.” Symbolic violence is violence that is “misrecognised,” often as something good. Misrecognition and collective denial are prerequisites for mass violence. In a sense, people simply become unresponsive and symbolic violence breeds physical violence.

The general societal acceptance of all the massacres which the state’s security forces committed gave the Ministry of Interior the green light to commit a massacre as large as that of Rabaa Al Adaweya, and as it passed with  more acceptance, the state continued to kill and arrest hundreds more over the past year. Since then, one could barely keep track of how many are killed or arrested with every passing week, especially when it feels as though nothing could be done.

How can one, paralysed in the face of the state’s brutality, break this trend? The first step is to recognise the “misrecognised” symbolic violence, to move beyond binaries and labels, to not become normalised to the numbers, the death, and the arrests – to hold on to one’s humanity, and to document and remember regardless of who the victims may be.

Jihad Abaza is a politics reporter for Daily News Egypt.