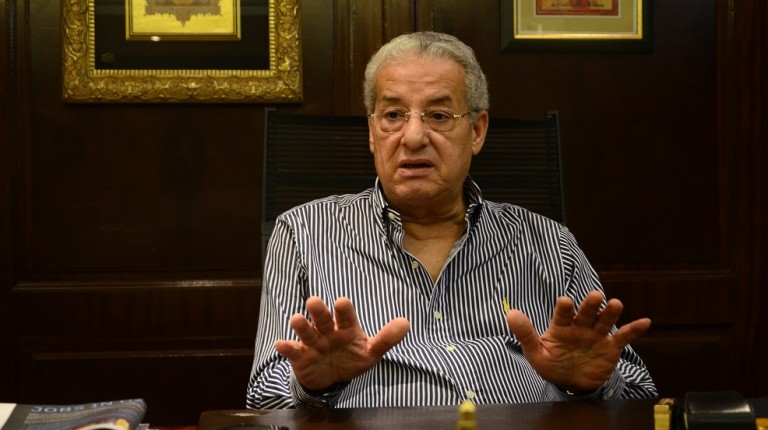 The Arab Contractors’ extensive involvement in the construction industry in Egypt and will be involved in the new Suez Canal project in conjunction with Orascom. In an interview with Al-Borsa, company Chairman Engineer Mohsen Salah talks about the the company’s upcoming expansion projects in Egypt and Saudi Arabia.

What is the Arab Contractors’ project target by the end of 2014?

The company hopes to increase the value of its business to EGP 16bn domestically after achieving EGP 13bn during the months of June, July, and August. It is [also] seeking to conduct international projects worth $5bn by the end of 2014.

Do you have interest in other markets at this time?

The company is currently considering expanding in the Saudi Arabian market through constructing 60 tunnels in Mecca as well as conducting infrastructure projects involving water, sanitation, electricity, and roads in accordance with the state’s plans to develop the holy city and increase its capacity during the pilgrimage season. We hope to expand our business in Saudi Arabia by the end of 2014-2015 a value of more than SR 3bn compared to the current SR 1bn.The new projects we are currently competing to undertake in Saudi Arabia include desalination and infrastructure projects as well as bridge and tunnel construction.

Arab Contractors is focusing on the Saudi market due to great hospitality from Saudi officials toward Egyptian companies. The size of the company’s business in Iraq is worth $300m, represented in three projects. This includes a desalination plant in Basra worth $180m with a capacity of 199,000 cubic metres per day.

A coalition consisting of Arab Contractors and Japan’s Hitachi is in the process of implementing the desalination project, which the Iraqi government funds. The project is expected to be completed at the beginning of the 2015/2016 fiscal year.

The second project is the Diwaniyah power station worth $169m with a capacity of 500 MW, being implemented through a coalition led by Arab Contractors and Sweden’s Bauer.

The third project entails development for both sides of the Army Canal in Baghdad. The project will cost $30m and [compensates for the] absence of a waterway channel for sewage.

As for projects in Kuwait, the volume of company business in the country is worth KWD 650 million divided among in two projects. The first is the Sheikh Jaber Al-Sabah Hospital, which cost KWD 350m to construct. The venture includes 1200 beds and is expected to be completed at the beginning of August 2015.

The second is the Jahra Road project for which costs are expected to reach KWD 300 million. Construction operations will be completed by the beginning of 2016.

The company has ceased operations in Libya following a recent upswing in violence in the country. The company’s business in Libya was worth EGP 610m of water and sewage projects, the extension of the coastal road by 70km in Tobruk, soil dam projects, and concrete work in Sirte.

The company hopes for its business in Equatorial Guinea and Nigeria to expand to $3bn over the next two years through infrastructure, bridge, dam, and residential community projects. We hope to increase business in Nigeria from the current $152m to $1.5bn.

The Algerian market is an important foreign market for the company, especially after the company concluded contracts for 4,500 residential units worth EGP 180m; the project will be completed mid-next year. There are talks in the works with the Algerian Ministry of Housing for the implementation of infrastructure projects for roads, electricity, drinking water and sanitation for an integrated residential city at a cost of $150m.

Meanwhile, we are currently implementing a number of projects in the Gulf as well, after the completion of 4 successful contracts with the private sector in the United Arab Emirates (UAE).

Will the company be participating in the new Suez Canal project?

A coalition between Arab Contractors and Orascom Construction Industries under the supervision of the Armed Forces’ Engineering Authority will begin constructing a total of six tunnels under the Suez Canal. Spending will be distributed among three tunnels in Port Said three in Ismailia, of which four will be designated for cars and two to the railway.

Are there any other projects in the pipeline?

We are looking to apply to the Ministries of Transportation, Housing, and Defence to implement 500km of the national roads project which will eventually measure a total 4,400km. The project was recently announced by President Abdel Fattah Al-Sisi and is set to be implemented within one year. It has begun studying the implementation of an integrated residential compound on an area of 100 acres on its share of Ard Al-Mostaqbal in New Cairo. We are consulting and design departments will complete designs and studies for the project over the next six months in preparation for the start of construction work.

The study will include the total project cost, the number of housing units to be built, and the type of recreational and commercial activities that will be included. There is an offer from Gulf companies to participate in constructing the residential compounds at varying levels. Arab Contractors owns 15% of Ard Al-Mostaqbal in New Cairo with the rest distributed among banks. The land is owned by Arab Contractors, Banque Misr, and the National Bank of Egypt. The land was a payment for government debts to the three entities worth approximately EGP 11bn.

Arab Contractors has had good experience in building social units and housing projects. Are there any new plans in the works?

The Arab Contractors’ share within the one million units for social housing projects offered by the Ministry of Housing following the January 25 Revolution range between 2000-2400 units distributed among four groups, each between 500-600 units. The cost of implementing the residential units will reach EGP 180m, and they will be spread through the Cairo, Giza, Alexandria, Ismailia, and Beheira governorates. The Arab Contractors recently began to reduce the cost of one million units in housing projects for low-income citizens and will apply the same principle to the state level at Mehleb’s request.

The company completed the concrete work for the Tahrir Garage, and is currently running operational trials and honing specifications to ensure the effectiveness of the operating system. Tahrir Garage will begin operations on September 30 at a total cost of up to EGP 320m. The garage occupies an area of 18,000 square metres, and consists of 4 underground floors, can accommodate about 1,700 cars and 24 tourist buses, and is equipped with the latest signboards as well as security, ventilation, and protection systems against fires.

What about the delayed projects?

The company is ready to begin implementing the delayed project to link land between Egypt and Saudi Arabia through a land bridge which would pass over the Tiran and Sanafir islands and end in South Sinai.  All project studies are ready for implementation and are awaiting the signal to start work. The project had been rejected during the rule of former President Hosni Mubarak, in spite of its great economic returns, due to conversion of the most resource-rich areas into transfer facilities for goods and passengers. In addition, the project was not implemented at that time because the most environmentally rich and touristic areas became receiving areas for giant shipping trucks, oil pipelines, and transit and cargo containers on a daily basis.

During former President Mohamed Morsi’s rule, there were attempts to ‘brotherhoodise’ the company wherein Muslim Brotherhood members attempted to penetrate the fabric of the company and assume leadership positions, but they were unable to infiltrate the company as they many government ministries in Egypt.

As soon as I began work at the company I requested to see all documentation related to company hirings during the Brotherhood era, and the decision was made to not have any political discussions within the headquarters of the company so as to ensure its status as a place of work.

The company has worked on medical projects…

The company is studying a number of medical projects in the Egyptian market for implementation in the coming stages.

It will also be finishing Dar El-Salam Hospital next week, after nearly 16 years since development stopped given problems at the hospital’s facilities. The hospital contains 6 floors which include 170 beds, 8 operating rooms and 20 rooms for care, emergency services, and other specialised sections for dialysis and cancer treatments, and will contribute to the service of more than 2m citizens.

In addition the company recently completed its work at Qasr El-Aini hospital in which nearly EGP 170m was invested. The hospital consists of 8 floors which include a unit for physiotherapy and rehabilitation, 9 rooms for operations, the Department of Medical Laboratories, a blood bank, 150 beds for intensive care, the Department of Diagnostic Radiology, and an emergency care centre.

What of renewable energy projects?

The company is currently studying the implementation of solar-powered stations in a number of governorates in Egypt, but I can’t announce the details of the projects until the studies are completed.

The company intends to complete the Suez power station with a capacity of 650 megawatts through August 2015. The station is a five-year plan for the state, which will be linked to the national electricity grid.