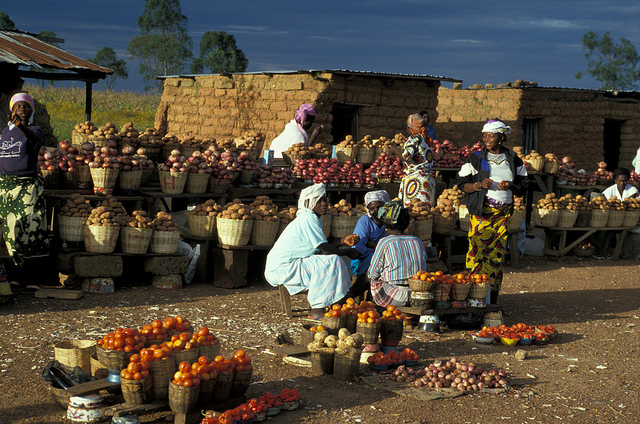 With rising food prices and so many mouths to feed, Cameroon is grappling with a serious crisis. The International Monetary Fund (IMF) reports that prices of main food items have skyrocketed this year, some by up to 20% from last year’s prices. The price of sorghum, for example, rose by 4%, maize by 5% and rice by a whopping 22%, according to the Food and Agriculture Organization.

For Cameroonians, the recent spike has come as a surprise because prices were relatively stable last year. Economists blame inflationary trends that began in 2007.  Since then, the country’s rate of inflation has fluctuated between 1% and 5%. Though not alarming, fluctuations in inflation over the years appear to be having a cumulative impact on food prices this time.

Out of Cameroon’s 21 million people, 8 million people live below the poverty line, according to the World Food Programme. The country ranks 150 out of 186 countries on the 2013 UNDP’s Human Development Index, which measures countries based on income, life expectancy and education. There are fears that the sharp increase in food prices will worsen Cameroon’s poverty situation.

“Soaring food prices have negative short-run effects on developing countries that depend on imports for their food security and where the vast majority of households, including in rural areas, are net food buyers,” says the International Fund for Agricultural Development.  Cameroon’s food imports, notes the World Bank, comprise about 25% of total imports. Some Cameroonians are venting their anger through street riots and there are fears these may fuel political instability.

Increasing refugee population may also be exacerbating food prices, many believe. Waves of refugees from the politically-turbulent countries of Chad, the Central Africa Republic and Nigeria are seeking asylum in the more politically stable Cameroon.  The United Nations High Commissioner for Refugees estimates that more than 100,000 refugees have crossed over to Cameroon as of 2013.

In addition, water shortages continue to affect food production. According to the World Health Organization, rainfall lately has been low and irregular, affecting crop yields.  In 2012, for example, severe drought followed by flooding throughout the Sahel region worsened Cameroon’s water problem.

The country learned some useful lessons from past food crises. In 2008, rising food and fuel prices sparked riots and looting in Yaoundé, Cameroon’s capital city and Douala, its major seaport city.  The government responded by creating an organisation to regulate basic food supplies. The agency has had limited success as food prices continue to soar.  Government is also providing subsidies for school and work programmes, to alleviate sufferings.

The Cameroon Consumer Association believes that subsidies have been timely. How far these will go to lower food prices and assuage anger remains to be seen.