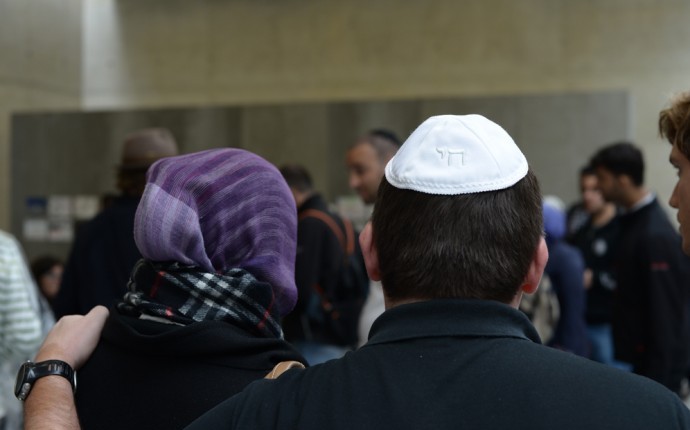 When Egyptian Muslim Hugger Haggab first learned that she would be sharing a room with two Jews at the Muslim Jewish Conference (MJC) in Vienna last week, “I was tensed,” she said. But by the end of conference, which wrapped up Sunday, the three were close friends.

MJC, a global non-profit organisation, has been bringing together Muslims and Jews from all over the world for a six-day conference every year since 2010. The conference gives Muslim and Jewish participants the opportunity to get a glimpse into the cultural and religious identities of one another by discussing narratives and overcoming the stereotypes and prejudices about “the other”, according to MJC’s philosophy and approach.

More than 100 young people attended this year’s conference, themed “Combating for Peace”, with some travelling as long as 30 hours to get there, the non-profit reported.

Muslim and Jewish speakers shared their personal experiences of rejecting violence in favour of a constructive dialogue for peace, according to MJC. As the Israeli-Palestinian conflict has become one of the most challenging and controversial conflicts that lead to a breach between Jewish and Muslim communities, it is important to work on a culture of dialogue and understanding.

“At the Muslim Jewish Conference we don’t do what’s easy, we do what’s necessary,” said Ilja Sichrovsky, secretary general of MJC.

Haggab said she was worried about how she might deal with Israeli Jews.

“I nevertheless wanted to hear about how they view the conflict and I wanted to share my point of view, as an Egyptian,” she said.

Haggab said her personal highlight at the conference was celebrating the Shabbat with her new Jewish friends. At one point at lunchtime on Shabbat, while sharing bread and grape juice, her Jewish roommate came up to her across the room to whisper a blessing into her ears, which is part of a Jewish Shabbat tradition.

One of the discussion panels focused on gender and religion in Islam and Judaism. Believers of both religions shared their thoughts and perspectives on the role of men and women in society, Haggab said.

She was astonished by the similarities of the two Abrahamic religions.

“In Judaism men have the same responsibilities as in Islam and observant Jewish women put on the veil as well,” she said.

Egyptian participants said they participated in the interfaith dialogue to represent Islam and their Muslim community.

Haggab said she is keen on learning more about different faiths in order to deepen the understanding of her own religion, Islam, and her personal belief. It is exciting and interesting to learn from each other and find out about the similarities in belief that the two religions share, she said.

“I also want to change the misperceptions some people have about Islam,” she said.

She may not remember the names and faces of all the people that she met, Haggab said. “But I remember their stories and the humanity that united us.”