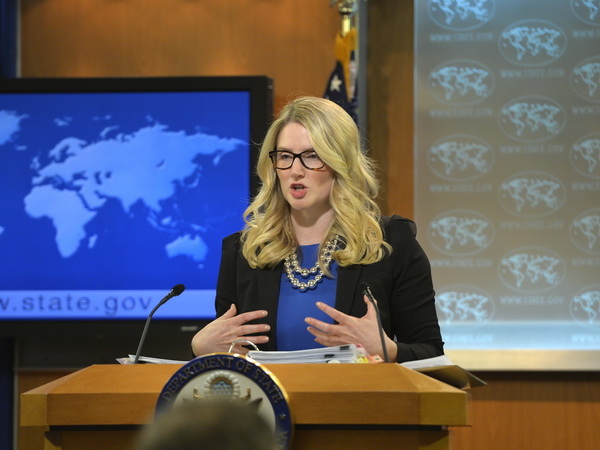 In response to Egypt’s call for restraint regarding protests in Ferguson, United States, State Department Deputy Spokeswoman Marie Harf said Wednesday that the situation witnessed in Ferguson is not comparable to what happens in Egypt.

A spokesman of Egypt’s foreign ministry backed Tuesday the United Nations’ calls for the US to deal with the situation in Ferguson with restraint and “according to the American and international standards”.

Demonstrations started in Ferguson, Missouri, following the shooting and killing of African-American Michael Brown by a policeman on 9 August. The US authorities have dealt with the demonstrations, which at times escalated into riots, by imposing a heavy police presence and curfew in the St. Louis suburb.

In the Wednesday State Department press briefing, journalists suggested that the authorities’ reaction to the events in Ferguson is undermining US criticism on the human rights situation in other countries, such as Egypt.

Harf responded that “people are free to say what they want […] But I would certainly strongly disagree with the notion that what’s happening here is comparable in any to situations in some of those countries.”

She stressed that countries are free to criticise the US, but that the country is also free to disagree with that criticism. The difference between the situation in the US and – among others – Egypt, she said, is that the US is dealing with its issues “openly and honestly and transparently”.

“I would encourage the countries you named particularly [Egypt] to do the same thing,” she added.

The spokeswoman repeated US concerns over the human rights record of Egypt, citing the imprisonment of journalists and mass death sentences, and rejected any comparison between the situation in Egypt and events in Ferguson.

The US has criticised the human rights situation in Egypt following last week’s Human Rights Watch report on the violent dispersal of the pro-Muslim Brotherhood protest camps in Rabaa Al-Adaweya and Nahda squares in August 2013, which the human rights watchdog said left over a 1,000 dead. Harf said Monday that the US is “deeply disturbed” by the findings of the report.

The Egyptian government accused the report of being biased in favour of the now outlawed Brotherhood and referred to it as “unprofessional”, “twisting the truth”, and “a flagrant violation of international law”. Various Egyptian politicians suggested that Human Rights Watch was part of the Brotherhood or aimed to spread chaos in the country.

Harf angered Egyptian authorities when she said the US had temporarily suspended military aid to Egypt in October 2013 because the country had used the equipment “against their own people”, prompting a reaction from the Egyptian side that these comments were “sheer fantasy” and “completely ignorant of the realities in Egypt”.