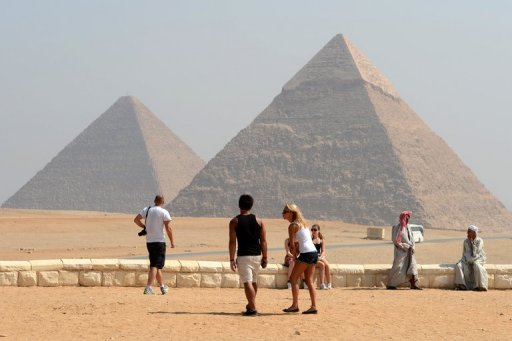 Egypt hopes to raise its share in Britain’s tourist market to 2.5 million tourists compared to the 1.5 million that visited Egypt during 2010, according to the British Ambassador in Cairo John Casson.

“Britons love Egypt and its people, and the Giza pyramids are a source of pride for an area that forms one of the world’s greatest civilisation and heritage sites,” Casson said.

British tourism reached a peak in 2010 when 1.5 million tourists visited Egypt. Last year, the same figure fell below 800,000 according to the Sub-Accounts Unit of the Ministry of Tourism.

The Ministry of Tourism is undertaking major efforts to restore cultural tourism traffic, according to Tourism Minister Hisham Zaazou. He added that this type of tourism has suffered over the past three and a half years since the beginning of 2011.

Tourism declined during the first half of this year to 4.5 million tourists, representing a 25% decrease compared to the same period last year.

According to the Minister of Tourism, Britain forms one of the most important tourism markets for Egypt.

“British traveler Levison Wood’s adventures in Egypt had a significant impact on promoting Egypt as a tourism destination,” Zaazou said.

Levison Wood made the trip from the headwaters of the Nile to its endpoint in Egypt.

Support for the trek came in the context of ambitious efforts to utilise the trip to promote tourism to Egypt and shed light on the nation’s monuments and tourist attractions according to a statement issued by the Ministry of Tourism.

According to Mohammad Ayub, chairman of the Cruise Committee at the Egyptian Chamber of Hotels, tourism traffic in Luxor and Aswan remains very weak.

Cruises represent Egypt’s most damaged tourism sector, as more than 280 cruise hotels have ceased operating over the past three years out of a total of 286 according to the Committee Chair.

Ayub hopes to see an increase in traffic for Luxor and Aswan’s cruise hotels during the coming winter season what with security and political stability predicted to characterise the near future.

“The Giza pyramids have witnessed some development recently thanks to cooperation between the ministries of Tourism and Antiquities,” said Antiquities Minister Mamdouh Eldamaty.

Ministry of Antiquities profits declined by more than 60% over the past year, according to former Antiquities Minister Mohamed Ibrahim.

Eldamaty called for a combination of cultural and entertainment tourism through the ministry’s moves to open archaeological museums in both Hurghada and Sharm El-Sheikh.