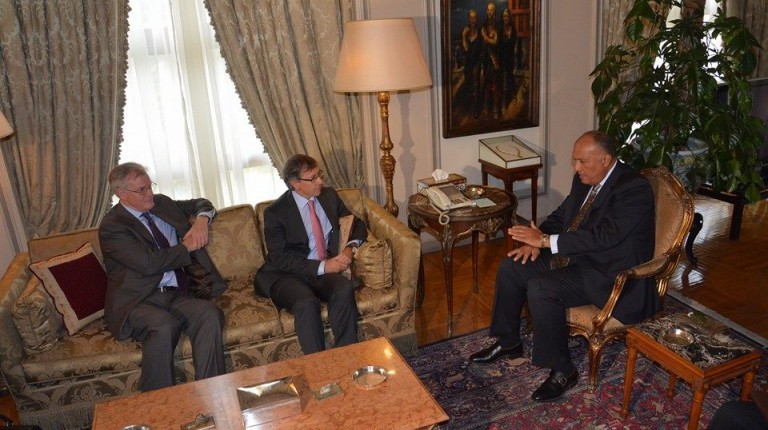 Egypt’s foreign ministry said Tuesday that it is following the situation of Egyptians stuck on the Libya-Tunisia border and is working to repatriate citizens in coordination with the aviation ministry.

Foreign Minister Sameh Shoukry met with United Nations Envoy for Libya Bernadino Leon on Tuesday morning to discuss the crisis in Libya, updating him on the results of the regional conference held in Cairo on Monday. Shoukry also discussed the issue with his Italian counterpart by telephone on Monday evening.

Libya’s General National Congress (GNC) appointed a new prime minister on Monday afternoon, deepening the current crisis. Ministers from neighbouring countries called for an end to armed violence and the implementation of a political dialogue.

The Islamist-dominated GNC unilaterally invited Omar Al-Hassi to form a “salvation government”, according to Libyan state news agency, having refused to be replaced by the House of Representatives (HoR) elected in June. The move was rejected by Abdullah al-Thani, who was reappointed prime minister by the HoR also in June, having resigned in April following threats and attacks on his family.

The move comes following Islamist militant group Fajr Libya (Libya Dawn) took control of Tripoli International Airport form nationalist militia Zintan. The Islamists called for the GNC to convene after accusing the HoR, based in the eastern city of Tobruk, of being complicit with two separate airstrikes in Tripoli last week, although it is still unclear who carried out the operations.

United States officials told the New York Times that Egypt and the United Arab Emirates worked together to launch airstrikes that targeted Islamist militants in Tripoli, taking Washington by surprise. Egypt and the UAE are both averse to Islamist rule, especially in light of the overthrow of former Egyptian president Mohamed Morsi, a member of the Muslim Brotherhood, in July 2013.

Egypt denied on Sunday that it carried out the airstrikes, having been accused by Fajr Libya of doing so.

Egypt convened on Monday the fourth ministerial meeting of Libya’s neighbouring countries to discuss the crisis. The foreign ministers of Libya, Tunisia, Algeria, Sudan and representatives from the African Union and the Arab League called for “non-interference” in Libya’s affairs “and to maintain political independence” in a joint statement following a daylong conference in Cairo.

The ministers stressed the need for “a comprehensive commitment to dialogue, to renounce violence and support the political process” calling for “external parties to refrain from supplying and providing parties illegal weapons”. They also called for increased surveillance of air and sea ports to monitor this situation.

The US, United Kingdom, Italy, Germany and France reflected these calls in a joint statement released on Monday evening, stressing the need for an end to the violence. They also called on the international community to support the elected HoR. The joint statement said that the current turmoil “exacerbates current divisions and undermines Libya’s democratic transition”.

They also welcomed the upcoming UN Security Council discussion on the situation, “including consequences for those who undermine Libya’s peace and stability”.

Egypt has been increasingly concerned about the situation in Libya, especially due to border security and the threat to the security of Egyptians living inside Libya. Earlier in August thousands of Egyptians were transferred from the Libya-Tunisia border having fled the violence in Libya’s cities.