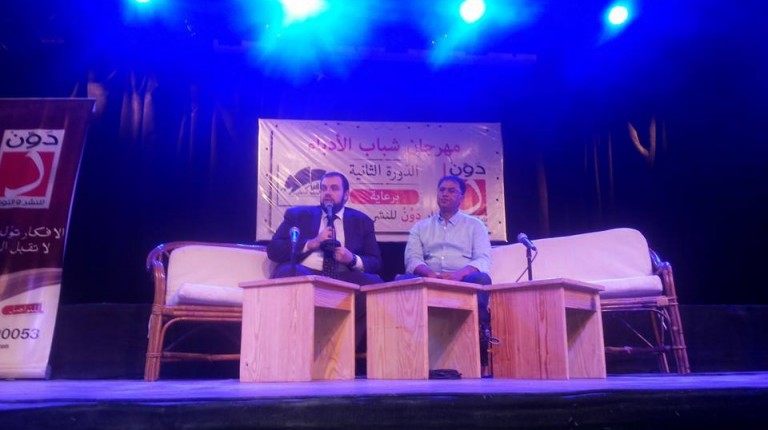 The second round of the festival, which featured sessions by local authors, builds on last round’s success. More than 1,500 mainly young and well-educated Egyptians came to attend the discussions with aspiring writers as well as best-selling novelists, according to the event organiser Dar Dawen.

Eighteen writers shared their stories and experiences with the readers’ community and in return got inspired by creative ideas of the audience. The event was targeted at bringing the reading community together to network and form a closer writer-reader relationship, said Ahmed Mahana, Production Manager at Dar Dawen Publishing.

“It is a unique sort of event in Egypt,” Mahana said.

In the past few years the number of young readers increased by high number, said Mahana. Young readers in particular are looking for authors who use a common youth language telling stories that are based on their personal experiences, he said.

“We have a generation gap in reading,” said Sherif Bakr, General Manager and Editor of Al-Arabi Publishing, regarding the strikingly young audience. In his speculation this new trend roots in a detachment between the government and the youth in general.

“Young people get political active and take matters into their own hands,” Bakr said. At the time of the revolution books got into fashion again, especially among the Egyptian youth, he said. “We sold books as kind of a revolution souvenir,” the publisher said.

The literary scene also discussed the Egyptian market, the book industry and challenges of writing and publishing in Egypt. Bakr views eBooks as the new challenge for the literature market but also sees great potential in it.

“E-books may solve our problems of distribution,” Bakr said, hoping that with events like this they can introduce innovations and new releases to a new clientele of readers.

With around 250 hours spent in cars over a year, the average Egyptian could spend the time listening to a good audio book, Magdy said. “Egyptians don’t like to read much, so we can introduce them to the fascination of books in a different way,” he said.

Menna Akmal and Mohamed Abd El Moneem, young students attending the event, want to share their passion for books with a greater community. The students plan on starting a book club, “Book Sotor”, where young readers can meet weekly and discuss books, said Akmal.  The club’s page on Facebook already got thousands of likes even before the official launch.

“Our goal is to encourage more people to read,” El Moneem said.