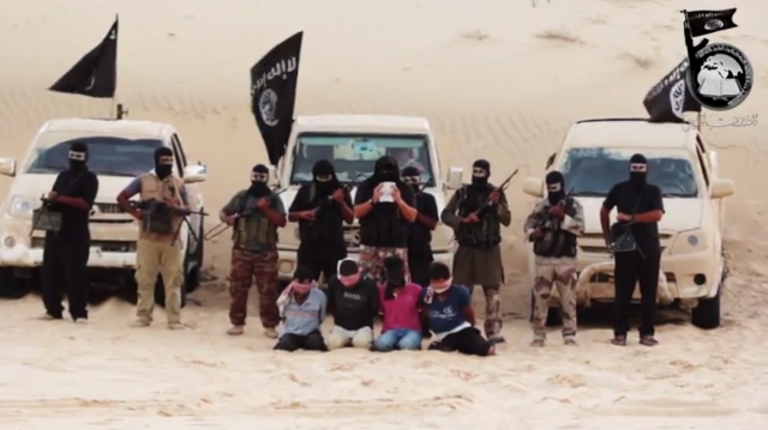 Sinai based militant group Ansar Beit Al-Maqdis (ABM) claims to have beheaded four men they claim worked with Israeli intelligence in a video posted on the Internet.

The video, posted early on Thursday morning, shows nine masked men, eight of which are armed, another reading a statement to the camera. Four other men kneel in front of the militants as the statement is read out. The militants accused the four of providing intelligence to Israeli intelligence (Mossad).

The video shows each of the men responding to questions regarding the accusations, talking about the information they allegedly provided to the Israelis.

ABM killed three of the group’s fighters, images of whom appear at the start of the 29-minute video.

The video ends with the militants cutting off the heads of the four kneeling men. It is the first incident of beheading to have been made public in Egypt.

Earlier in August reports emerged, citing security officials, that four decapitated bodies had been found in the Sinai Peninsula, an area that has seen a spike in militancy over the last year.

ABM is based in Sinai but claims to have carried out operations in Cairo and other areas of Egypt, including an assassination attempt on Minister of Interior Mohamed Ibrahim and bombings of security infrastructure.

Earlier in August the Ministry of Interior said it launched an investigation into another video with the ABM logo showing the shooting of four police conscripts in June.