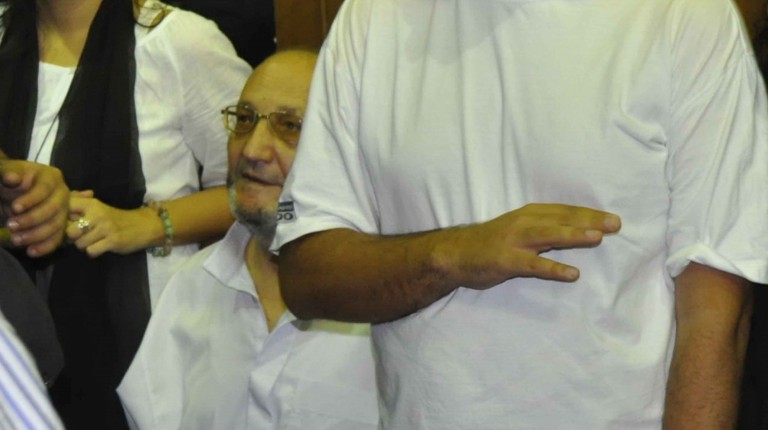 Of his three children, Alaa, Mona and Sanaa, two are currently behind bars – Alaa, the eldest son and the youngest daughter Sanaa. They were allowed to attend their father’s memorial service on Saturday, before Alaa was taken back to prison and Sanaa was taken to a police station.

As she was being led away from the memorial by security forces, Sanaa was chanting “down with military rule.”

Among the prominent figures who attended the memorial service are former presidential candidates Hamdeen Sabahy and Khaled Ali.

Ahmed El-Masry, who attended the memorial, said that while Sanaa was being led away, one of the security personnel shoved her, which sparked outrage among the remaining crowd. El-Masry said the crowd started chanting against the Ministry of Interior, military rule, the Protest Law and called for freedom for those behind bars.

El-Masry said there were people from all political factions, including workers from the Mahalla strike in 2008, who Seif El-Islam defended alongside other lawyers.

Seif El-Islam, who took on many court cases relating to torture, is known for defending people from one end of the political spectrum to the other.  “All political currents agreed on him, because he defended anyone who is wronged,” said El-Masry, he himself a victim of arrest without charge and torture.

Seif El-Islam passed away at the age of 63 on Wednesday afternoon, after being unconscious for almost two weeks following a cardiac arrest.

In 2008, he told Amnesty International that he saw torture “as a form of cancer that can eat up a country’s youth and stifle its ability to change, criticise, reform, and rebel”.

Seif El-Islam was the former director of the Hisham Mubarak Law Centre, which he co-founded in 1999. He was once a member of the National Council for Human Rights, having been appointed in September 2013. He however resigned in December in objection to the constitutional declaration issued by Muslim Brotherhood politician and then-president Mohamed Morsi.

He was arrested several times during the presidency of Anwar El-Sadat, and was tortured by State Security in 1983 for his political work, serving five years in prison under the regime of ousted president Hosni Mubarak.

Both Alaa and Sanaa are currently on hunger strike. Alaa was sentenced to 15 years prison in absentia, on charges related to violating the Protest Law. Meanwhile Sanaa is in custody, awaiting trial after she was arrested in June outside the presidential palace while demonstrating for her brother’s freedom and against the Protest Law.

In addition to his three children, Seif El-Islam is survived by his wife, Laila Soueif, a professor at Cairo University also known for her political activism and advocacy for academic freedoms.