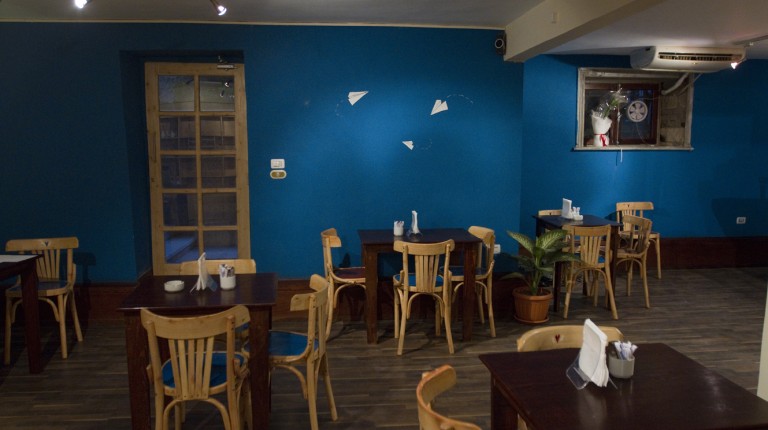 Get ready art fans, the opening of a new art space in Cairo is near. ROOM is the name, a bright Garden City basement the location. The plan is to hold dance classes, panels, talks, film screenings, acting workshops, rehearsals, and concerts. Journalist Tine Levant sat down with Ahmed Zeidan, the brain behind it all, to talk about how he came up with the idea for this ‘cultural centre’, what will take place there, and why he prefers not to rely on funds.

What kind of activities will be organised at ROOM?

We haven’t nailed down the exact schedule yet, but as dance classes we so far have salsa, zumba, ballet for children, contemporary dance, and Bollywood. A workshop we will organise soon is about improvisation for actors and directors. Then of course there’s the opening event on the 15th of August, with Ahmed Saleh and Miniawy. Those are the upcoming events.

Could you already give us some names of bands that will come here to perform?

We try to collaborate with eka3, a music platform that works with Like Jelly, Youssra El Hawary, Tamer Abu Ghazaleh, Maryam Saleh… But we will also have musicians from abroad. We haven’t announced it yet, but we have the idea to start with Friday afternoon concerts next month. Most of them will be surprise concerts – the names will not be announced – with people who are very popular. They will play for an hour. We will put a qualitative video recording of these concerts on a YouTube channel. We just don’t have a name for it yet.

How would you describe ROOM?

Could you tell something about the history of the building?

The British army used the building as its headquarters for the Middle East in the 1940ies. Very important events took place here such as the negotiations over the independence of Syria, Lebanon… A lot of well-known war generals came here at the time. They called it ‘Grey Pillars’ or ‘Number 10′. A man named Omar Sirry had the building built. We can’t find a source to verify the exact construction year, what the story of the building is, and who Omar Sirry was. Our neighbours told us he was Turkish but we don’t know if that’s true. You can see his initials on the main door. We still try to look for more information about the history’s building and about what happened in it.

First of all, I have lived in Garden City for four years now and I like the area a lot. It’s close to Downtown. It’s not as closed as some other areas like Maadi, Zamalek… It’s five, ten minutes walking from Tahrir. Also, there are not enough art spaces in this area. There are, such as Medrar and Falak, but the area needed more. It has the capacity for it.

What is the difference between ROOM and other art spaces?

When I started this, one of the basic targets was not to use funds. We’re trying to build a self-sustainable business model so to have an art space that is mostly free of charges. Most of the events will be for free. The money comes from selling coffee and the dance classes only. That can help us for the expenses of the panels, talks, the equipment… which will all be for free. Also, we will not force people to order a drink or something. I still have the chance to apply for funds but I don’t want to do it, unless I’m totally desperate. I believe that funds are not a sustainable system to build a space on.

What’s on the menu?

That’s the hardest question in the world. We have sandwiches. There’s coffee. And it’s not Nescafé Gold! We’ll grind coffee beans ourselves and make our coffee as fresh as possible. We’re working really hard on finding a unique source of coffee by trying different kinds of beans. We also have ice cream, ice tea…

ROOM is located in Garden City, the Facebook page is in English… What is your target audience?

We want to widen our audience as much as possible. But at the same time we don’t rely on funds and that makes us dependent of a specific type of audience. However, the workshops will be announced in Arabic for now on. Our posters will also be in Arabic and will be spread in Downtown and other neighbourhoods. We are nearby Downtown, Qasr El-Aini… People can reach us by any means of transport. The metro station isn’t far. But as a café and dance studio, our audience is not as wide yet as it should be. We’ll work on that as much as we can.