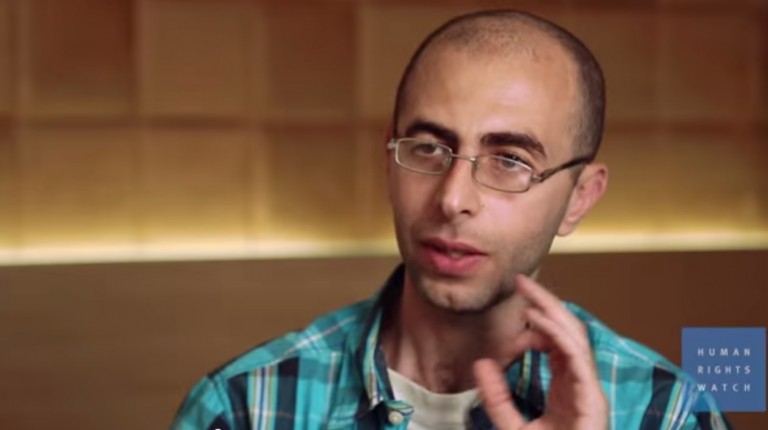 Human Rights Watch (HRW) warned Egyptian police “the further they go down the road of repression, the louder calls for accountability will grow”, after the arrest of a Rabaa Al-Adaweya dispersal witness.

Mohamed Tarek, was among eight people arrested on 29 August in Alexandria accused of protesting without authorisation, said Human Rights Watch (HRW) in a Monday statement. He has also been accused of illegal public assembly, blocking traffic, and membership of the banned Muslim Brotherhood.

Tarek, an academic who taught in the Faculty of Sciences at Alexandria University, was handed a 15-day detention alongside four others, “pending interrogations” into the accusations against them.

The group said of Tarek’s arrest: “Police significantly damaged his house and confiscated materials commemorating the Rabaa [Al-Adaweya] massacre during the raid on 29 August.”

Middle East and North Africa director of HRW, Sarah Leah Whitson said: “Beating and raiding the home of an academic who described what he saw there [Rabaa Al-Adaweya] would be a new low.”

According to Radawa Abdel Kawi, a lawyer working on Tarek’s case, he was not the only one beaten, with the defendants requesting a Forensic Medical Authority evaluation of their injuries. The defendants wish for the evaluation to establish whether they were beaten by the police or not.

When asked about the reason for keeping five defendants detained and releasing three, the media office of the Ministry of Interior said that the only one responsible for the release of defendants is the prosecutor.

HRW said it does not believe the arrest was related to the controversial report on the dispersal of the Rabaa Al-Adaweya sit-in in August 2013.

The Rabaa Al-Adaweya protest camp, which emerged in support of former president Mohamed Morsi in June 2013, was violently dispersed by security forces. HRW said at least 817 people were killed during the dispersal, but believes the actual death toll to be at least 1,000.

Tarek was dismissed in 2010 from the Faculty of Sciences of Alexandria University for demonstrating against the killing of Khaled Said. He has been an activist for several years affiliated with different groups, including the Al-Ghad Party and the National Association for Change formerly led by Mohamed ElBaradei.

HRW called for the Egyptian police to release the men or charge them with offenses that do not violate their rights.