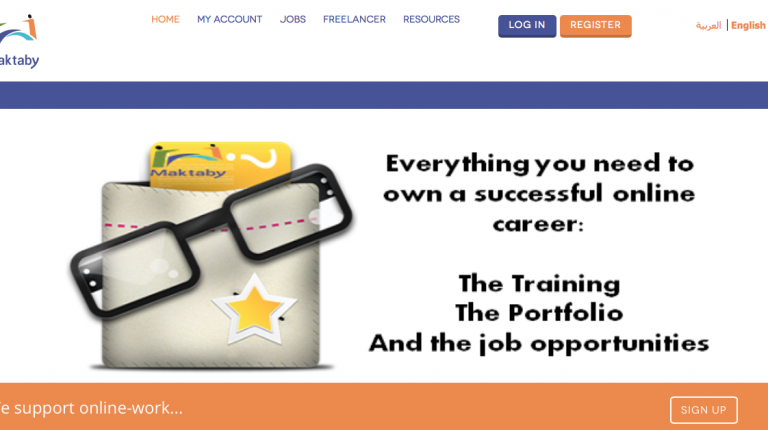 “Having knowledge is the extreme empowerment,” says Rasha Abo ElSoud, a 40-year-old entrepreneur who has launched a call for donations to support women in the beginning of their careers.

Abo ElSoud’s unique campaign does not raise money, instead, it raises knowledge.

To offer online training material in Arabic, people will donate content that could be produced in a one-hour tutorial, which will be accessible for free.

Anyone who masters a specific skill can participate in “The 1 hour campaign”, which challenges the common perception that offering knowledge is exclusive to trainers, she said.

“For someone to gain a skill, they have to learn first then practice,” she said. “We master the skills we learn from years of work like no one else [does].”

The campaign is a part of Abo ElSoud’s efforts to promote the culture of working online through “Maktaby”, an online platform for women working online she has founded.

“We don’t have the culture of online work,” she said. “It’s very limited to only people who work in IT and design.”

The economic difficulties in Egypt, namely unemployment and rising prices, indicate the need for new solutions other than the traditional work patterns, she said.

“New job opportunities are not sufficient for the number of new graduates,” she said. “It’s catastrophic.”

Maktaby aims to serve as a resource centre that provides online freelancers with training and tips, and also connects employers with certified online service providers.

Abo ElSoud chose to help women, the most promising category and the most committed to work, she said.

“I have kids,” she said, “I know how women struggle with work as soon as they have kids.”

Online work acts as an alternative for women who cannot work in regular full time jobs, she said.

Maktaby offers simple technical tools for video recording in “The 1 hour campaign”. Donors who cannot record the videos themselves can seek help from a production team.

“We, at Maktaby, are donating our effort for the campaign,” she said. “Each one of us will also record one video, so we have at least four or five confirmed videos from Maktaby alone.”

At the end of the month-long campaign, donated videos will be uploaded as “open source material,” not only on Maktaby, but on YouTube and other websites.  Tutorials will tackle broad topics such as entrepreneurship, as well as more specific ones such as legal tips, business writing tips, preparing simple presentations and excel sheets, she said.

“Since it’s only a limited time of one hour, the content will be practical,” she said.