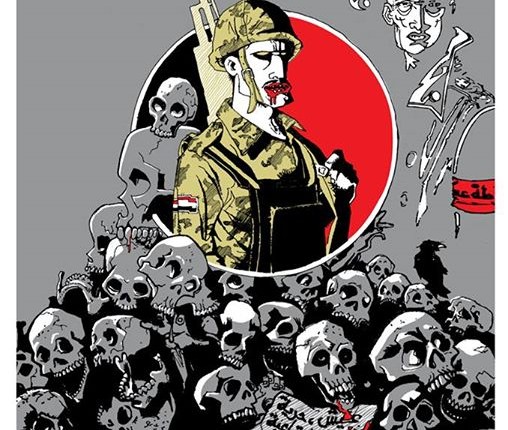 President Abdel Fattah Al-Sisi is dressed in a monochromatic shirt and a tie in the poster. Military badges decorate his colourful jacket, but instead of his face, the poster shows a grey TV screen broadcasting a bunny.

The piece titled “Who’s Afraid of Art?” was created by graphic designer Mohamed Fahmy, better known as Ganzeer, shortly after he left Egypt in May amid accusations that he had aligned himself with the Muslim Brotherhood, which the government had just labelled a terrorist organisation.

The 32-year old is one of many Egyptian artists involved in an ongoing clash between the establishment, represented by the regime and the mainstream media, and the counterculture of artists, who use their work as a form of visual activism.

Osama Kamal, a TV personality, accused Ganzeer of being recruited by the Brotherhood. The campaign, “Sisi War Crimes”, that Ganzeer had worked on with an international artist, Sampsa, was launched before Kamal’s accusation.

“If you’ve ever known an artist in your life, you would know that the only thing artists respond to is their conscience,” wrote Ganzeer.

The accusations have not been Ganzeer’s first clash with the establishment.  In May 2011, he was detained for a few hours after he had displayed posters designed as an advertisement of “The Mask of Freedom”, featuring an image of a gagged blind man.

The poster, which sends a “salute from the Supreme Council of Armed Forces (SCAF) to the loving sons of the nations,” is an attempt to say that the freedom SCAF is granting people is “purely decorative.” The behaviour of the regime that originally inspired Ganzeer’s design, was, ironically, exactly the same when they reacted to his work.

Since the eruption of the 25 January Revolution in 2011, the artist, who has almost abandoned commercial work to focus on responding to the rapidly changing political and social context, has produced a large body of work that was taken, for the first time in his career, to the street.

Although he does not consider himself a graffiti artist, Ganzeer has painted several pieces commenting on the course of the ongoing revolution, in the streets of Downtown Cairo surrounding Tahrir Square and other neighbourhoods. Ganzeer painted one of his most prominent pieces at a heavy traffic spot under the 6th of October Bridge, featuring a tank facing a bicycle. The cyclist was carrying bread – the first demand of the revolution.

Throughout the different regimes that have ruled Egypt since former president Hosni Mubarak was toppled, security forces have painted over graffiti pieces in the streets of Cairo.

Yet these attempts did not mute the artists, including Ganzeer, who continued using public space as a diary documenting events.

“The streets belong to the people, not any government entity,” he said in May 2011.

The clash with graffiti artists did not get any better with the ousting of former president Mohamed Morsi. In July of this year, 19-year old graffiti artist, Hisham Rizk, was found dead in Zeinhom morgue a week after being reported missing.  The official report stated that Rizk died after “drowning in the Nile.”

“The counterculture isn’t necessarily there to replace the establishment,” he said. “But it’ll shake the establishment up just enough to introduce a hybrid kind of art, and push art practices into new exciting territories.”

Despite his lack of academic art background, Ganzeer, who studied business, has been drawing since he was five years old.

“I never really imagined myself ever doing anything unrelated to art,” he said.

The young artist’s talent grew and took different directions over time. During his early college years, when he studied in Banha, 40 minutes drive from Cairo, Ganzeer started to learn more about design.

“It started out of a necessity to build my own website,” he said, “a process through which I started to read and learn about things like typography and layout.”

The artist and designer refuses to “kid himself” into believing that there are other motives behind doing commercial work than making money, he said.

“It’s really all bullshit and void of even the slightest ounce of nobility.”

Ganzeer, who chose a name that literally means ‘bicycle chain’ in Arabic, pursues in his art work what he cannot find in design jobs.

“The inspiration behind my own projects comes from a desire to comment on certain aspects of our lives,” he said.

After creating several designs as a part of branding local businesses, Ganzeer started developing his own art projects. In 2007, he produced “Gababret Al-Mahrousa” (Everyday Heroes), a series of graphic design images portraying Cairene workers as super-heroes, which appeared in his first solo exhibition organised by the Townhouse Gallery in the Sequoia restaurant in Zamalek, Cairo.

Ganzeer’s work spoke louder than his words – as read on one ad promoting his design work: “The image is always stronger than the word.”

The artist continued working on his self-initiated projects side by side with commercial work, and has cooperated with various organisations including the real estate company Al-Ismailia, which provided him with exhibition spaces in Downtown Cairo.

Corporations and companies, whose activities are not focused on arts, offer help to artists and art institutions. However, their commercial activities are always the motive behind this support.

“Although I appreciate any organisation’s involvement in the promotion of art, one mustn’t be sentimental about it,” he said, “[it is] always a matter of overlapping interests.”

The lack of art funding and the forced “censorship and stifling of expression on a multitude of levels” will not stop the flow of counterculture art, Ganzeer said.

“The good news is: there is definitely no lack in interesting subject matter.”