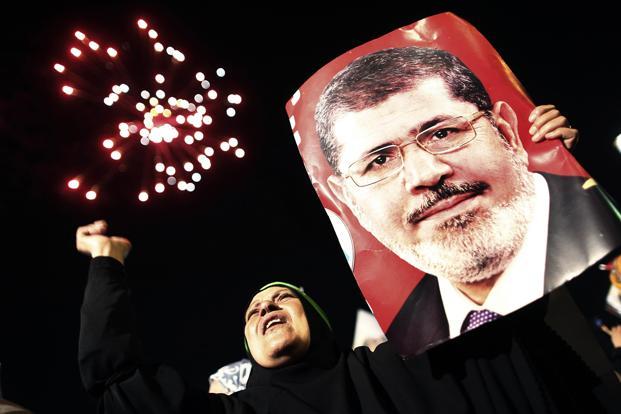 Ever since the downfall of the Muslim Brotherhood, a looming question has been raised: will the group return to political life under a new umbrella?

The Brotherhood has been facing the most serious ordeal in its 86 year-old history that had already witnessed several ups and downs.

It has been speculated that the leaders outside prison, whether those who remained in Egypt or others who had fled the country, are working to get involved in the political process once again as they considered their fall from power another setback in their long history. However, others put forth different scenarios.

Ali Bakr, senior researcher at Al-Ahram Center for Political and Strategic Studies, believes that the Brotherhood could once again engage in political life but not during the current time being.

“The Brotherhood has intellectual, cultural and political flexibility that allows it to get involved in any community…which was proved over the past decades,” said Bakr. “But they will wait for the right moment.”

According to Bakr, the security measures and public feud with the Brotherhood will not make it an easy job for them to return to political, or even social, scenes.

“The situation is different now, as they face diverse social segments [that do not accept their presence], but they will [eventually find a way out],” he added.

However, Bakr’s assumptions seem to oppose the regime’s view.

President Abdel-Fattah Al-Sisi hinted in his speech during the presidential inauguration earlier in June that the Brotherhood would no longer have a place in Egyptian political life.

Two months later, the administrative court dissolved the group’s Freedom and Justice Party (FJP), ordering the liquidation of its assets.

Nonetheless, Maher Farghaly, writer and researcher who specialises in Islamist movements, believes that the Brotherhood will resume their political activities “sooner or later”.

“Political Islam is a phenomenon that [has] existed for hundreds of years,” he said.

“It will not end easily and it will continue to exist as long as dictatorship and abortive social norms remain,” he added. “A group like the Brotherhood only grows in a corrupt environment.”

Farghaly expects that an internal revolt will erupt inside the Brotherhood and new leaders from the Brotherhood youth will replace the old ones and renew their ideologies. “They may eventually return as a group, not as a party.”

“Yet the group will never regain the status it used to have before 30 June,” he said.

Security expert Khaled Okasha, on the other hand, suspects that this time, the MB cannot be revived by any means.

“Before the Brotherhood assumed control in the country they were operating on the sidelines of the political scene; but after [Morsi became president] and after they won [about half the seats] of the parliament, they came under the spotlight,” Okasha said.

Morsi was deposed after one year in office by the army on 3 July 2013 following nationwide protests that demanded his ouster.

“The public saw a negative image of the Brotherhood when they were in power as their performance was dreadful… and forming alliances with terrorist groups that carried out several operations further deepened the public’s rejection of them,” he added.

On the other hand, Farghaly believes that having supporters nationwide, especially in  areas like Upper Egypt, would facilitate their return to the public scene.

“It is true that they have followers; but if we notice the number of Brotherhood protesters every time they hold a protest, we will find out that they diminished to reach a few hundreds or even dozens instead of the thousands who appeared at the beginning,” Okasha argued.

“The Brotherhood has lost the trust of a large segment of the Egyptian society…their relation to acts of violence and sabotage will never allow them to reach any status,” said Habib, who ended his connection with the group in July 2011.

Habib considers what happened to the Brotherhood following the army-backed revolt in 2013 as the final collapse in the group’s history.

“The group needs at least 10 or 15 years to come back to political life; and even if this happens one day, they will never be the same,” Habib said.

“Those who were not convicted may adopt a new vision or shape and attempt to practice politics as individuals or form a society approved by the government, but they can never form a political party again,” he added.

Last week, former Brotherhood ally Al-Wasat Party withdrew completely from the Anti-Coup Alliance formed by the Brotherhood and other parties and factions following the ouster of Morsi.

“Al-Wasat Islamist Party withdrew from the alliance because they realised that their involvement would derive losses rather than gains; but it was too late for them to understand this fact,” Bakr said.

Al-Wasat spokesman Amr Farouq said their alliance with the Brotherhood at this stage would not achieve the party’s goals.

“Our current strategy focuses on fighting corruption, achieving the right political transformation, realising the targets of the 25 January Revolution and working cooperatively with other political parties,” Farouk said.

The alliance did not react negatively to Al-Wasat’s decision.

“The alliance respects the choice of Al-Wasat… praising its efforts and steadfastness in confronting the… military coup,” they said in a statement, published on their official page on Facebook.

“The alliance stresses that it will strongly continue its peaceful struggle to restore the 25 January Revolution and its gains… and achieve its goals and restore the [right] political track,” the statement said.

Even though Al-Wasat pulled out from the alliance, Farouq believes that “Egypt will not develop while excluding any faction [such as the Brotherhood]”.

Al-Wasat party opposes the current regime of President Abdel-Fattah Al-Sisi, arguing that Egypt was in a better situation during the reign of Morsi.

“We are seeking a democratic system, which is not the case now,” he said.

According to Farouk, life will never get back to how it used to be before the ouster of Morsi.

Farouk is rather optimistic about the future of the Brotherhood, predicting it may resume its political activities after new group leaders take over and novel initiatives are presented.

Besides its setback inside Egypt, the Brotherhood faces fierce criticism from different factions in the region.

Abdel-Fatah Moro, head of the Tunisian Islamist Renaissance Movement, believed to be the Brotherhood wing in Tunisia, has recently criticised Egypt’s Brotherhood, calling on them to revise their ideologies, reassess reality and get back to politics.

He further denounced their slogan, “Islam is the solution”, saying it would not serve their country.

“Islam is not [new] to our communities to come and say you… [seek] the Islamisation of the society,” Moro said in statements during a seminar in Tunisia.

The ouster of Morsi, the frequent detentions of Brotherhood members and the sentences that they have received caused a rift between Egypt and Turkey, a major supporter of the Brotherhood and Egypt’s former regime.

Turkish President Recep Tayyip Erdoğan said recently in an interview with Al Jazeera English that his government would not recognise “a regime that has undertaken a military coup”.

“Erdoğan was aspiring to revive the Ottoman Empire in order to assume control over the region and the Brotherhood was his means to reach this end,” Bakr argued. “He views himself as the new Ottoman emperor.”

On 27 August, several Brotherhood leaders who fled Egypt appeared in the presidential inauguration of Erdoğan in Turkey.

They presented themselves during the ceremony as representatives of Egypt, while no Egyptian officials attended the ceremony.

Timeline of the Muslim Brotherhood history from 1928-2013

‘As a Black person in a white society, I can have an impact,’ says author Sharon Dodua Otoo