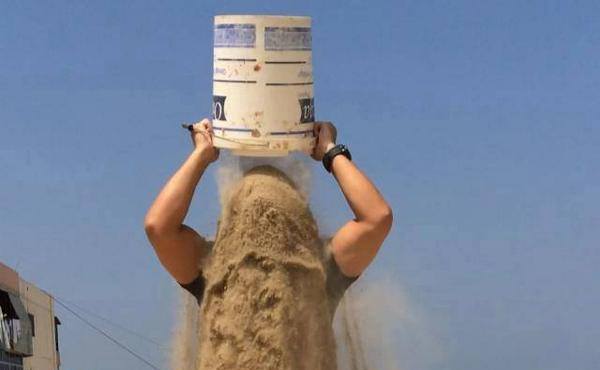 Mahmoud Darwazeh, a Jordanian stand-up comedian, stands in-front of a camera with a bucket by his feet. Darwazeh explains that he has been issued the “Ice Bucket Challenge” by a fellow comedian, Nicholas Khoury.  Instead of pouring ice water over his head in solidarity with Amyotrophic Lateral Sclerosis (ALS) patients, Darwazeh pours sand and dust on his head in solidarity with children of Gaza.

Darwazeh’s video inspired Maysam Abumorr, 25, a political science student in Gaza University, who wrote to him asking for permission to start a Facebook page called “The Rubble Bucket Challenge”.

Videos of celebrities and private individuals taking “The Ice Bucket Challenge” went viral on Facebook during the same time as the war on Gaza, said Abumorr. She, like many others, became aware of ALS, the disease she had never heard about before.

As Abumorr thought of a similar way to powerfully promote the cause of Gaza, she saw Darwazeh’s video.

“I wanted people to know how we feel during the bombing, and see how they will react,” she said. “This war was very bloody.”

Almost 11,000 houses were completely destroyed in the last war in Gaza, according to the United Nations Relief and Works Agency for Palestine Refugees in the Near East (UNRWA). About 37,000 houses were exposed to substantial damage, but are still inhabitable.  Around half a million people have been displaced, according to UNRWA.

“To pour sand on your head is nothing compared to seeing a whole family stuck under rubble,” she said. “It’s so hard.”

“The Rubble Bucket Challenge” Facebook page, which was launched in the last week of August, has nearly 12,000 fans. The campaign receives an average of 10 videos daily from all around the globe, said Abumorr.

“The Rubble Bucket Challenge” is one “interactive” way to show support for the people of Gaza other than sending money, which is the easiest thing to do, said Abumorr.

“Money will not bring back people,” she said. “It’s impossible to let [the war] go without holding [Israel] responsible for it.”

The campaign “re-humanises” war victims of Gaza, who have been perceived just as numbers, she said. Despite being “misled by the mainstream media”, the American audience was the most active in the campaign.

Abumorr hopes for more participation from Egypt, the country that can offer the most support to Gaza, she said. Unlike other instances of fighting in Gaza, Egyptians have showed less sympathy for the situation this time.

“Egypt is going through a hard time,” she said, “we hope it’s just the media.”