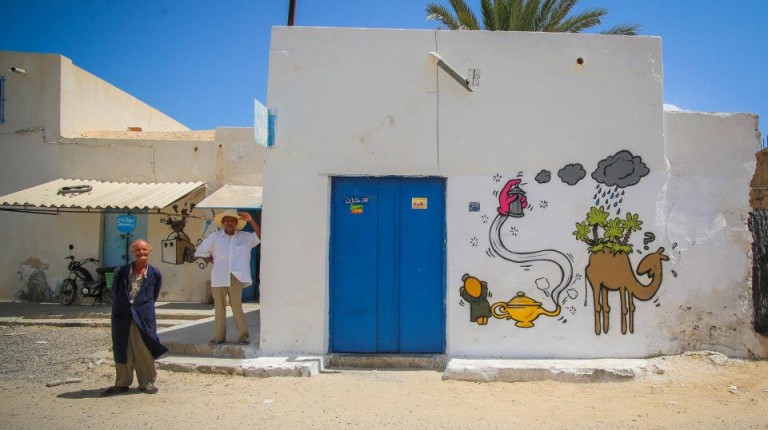 Old white walls hug the narrow alleys of Erriadh village, the sound of the wind shaking palm leaves fills the place. The small village, which lies off the tourist track on the Tunisian island of Djerba hosts an untraditional project in the middle of its traditional houses.

Bringing in about 150 street artists of 30 nationalities, Mehdi Ben Cheikh has launched “Djerbahood”, an in-situ gallery that features graffiti painted on the walls of Erriadh’s buildings, redefining its public space.  Between June and September, a group of artists come to Djerbahood, small groups of artists staying a week at a time, and work during their stay.

Ben Cheikh founded “Gallerie itinerrance”, an art gallery in Paris showing street art since 2004. After the success of his “Tour Paris 13” project, Ben Cheikh thought of doing a similar project locally. The idea behind the project is for people from all over the world to come and produce art in an Arab country.

“What I would like to do is talk about the Arab world in a different way, a positive way,” he said.

Bringing street art back to the streets, where it can be seen by everyone for free, Djerbahood serves to promote freedom of expression, he said.

Without forcing any kind of direction or restriction, artists at Djerbahood are only asked to be “aware of their surroundings”. Artists coming from different countries are expected to understand the nature and the history of the buildings they are painting on, he said.

“We want to keep the heritage of this village,” he said. “We have something no one has.”

Erriadh has a rich history and hosts many historic buildings including La Ghriba, Africa’s oldest synagogue. The village’s cultural heritage and location near the airport also makes it a perfect spot for holding the project, he said.

“Diverse communities of Muslims and Christians live side-by-side here,” he said. “It serves as an example for the whole world.”

Djerbahood is equipped with light and other facilities like seats for viewers to improve the visitors’ experience.

Ben Cheikh has invited the Egyptian artist Aya Tarek to “leave her mark” over the past week. The Egyptian street artist, Ammar Abou Bakr, will join soon too, Ben Cheikh said.

Renowned Tunisian artist, ElSeed, one of the artists of “Djerbahood”, introduced Tarek and Ben Cheikh at the international art fair “Art Dubai” in March. Ben Cheikh consequently invited her to Erriadh.

“She is very talented,” said Ben Cheikh, explaining why he invited Tarek. “Artists stay in with us for a week while they paint on the walls so we need to make sure everyone is comfortable.”

Tarek, who has been painting since 2008, is inspired by her hometown, Alexandria.  The piece she painted in Djerbahood was a reflection of one of her dreams, she said.

“I live by the sea,” she said. “I had a dream that I was underwater, I saw a pearl gatherer and a gold fish.”

With a different technique other than that “clean” style most European artists used, Tarek said she wanted to illustrate this dream.

“I did not like it though,” she said. “The technique is new to me and the wall is rich in texture.”

The experience left Tarek with a hope of similar projects in Egypt, but obstacles involved in obtaining permission stand in the way.

“This happened in Tunisia and the relationship with the government was smooth,” she said. “Why don’t we have this in Egypt?”

Djerbahood can serve as an inspiration for hopeful projects, which take the place’s aesthetic into consideration, she said. Most of the graffiti projects in Egypt are run by non-specialised people, unlike Ben Cheikh who is a curator himself.

“We have the places, but we don’t have the resources,” Tarek said.

France looking to avoid another Icelandic shock in last eight