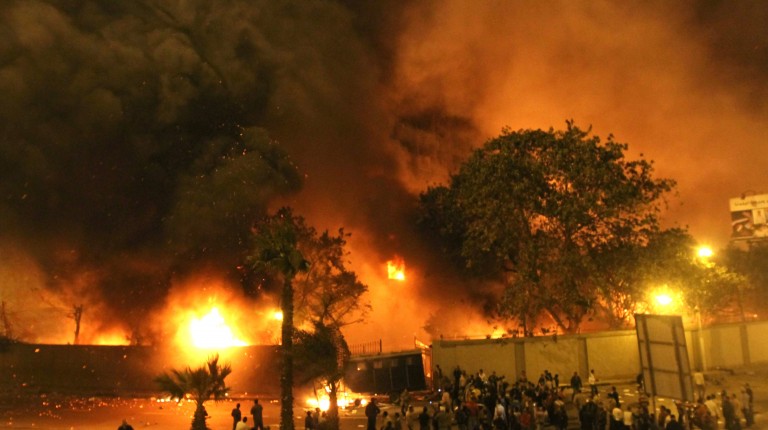 Heba works for a tourism company in downtown Cairo that shuts its doors at 10pm. Before the 25 January Revolution broke out in 2011, she had no problem going home to 6th of October City on her own at that hour, feeling that nothing would hurt her.

A few months ago, she was attacked by gunmen who stole her car but left her unhurt on the Ring Road shaking in fear until her brother picked her up and drove her to the nearest police station.

Heba, who never got her car back, is like many others whose cars or other belongings and properties were stolen due to the security vacuum Egypt has been witnessing since the revolution.

On 28 January 2011, dubbed the Friday of Rage, security forces failed to forcibly disperse hundreds of thousands of protesters in Tahrir Square with tear gas and live ammunition, ceding control of the streets to protesters.

Even the army troops deployed on the streets of Egypt that day never intervened to stop any illegal acts.

Security-wise, life has never been the same since that evening. Egyptians have been facing several types of crimes including thuggery, kidnap, armed robberies and carjacking, to name but a few. The looming question now is: will Egyptians feel safe again?

“Such crimes have been (systematically) committed on the Egyptian streets since 25 January (2011)…reaching a dangerous level…for example, car thefts increased by 400% while armed robberies grew by 250%,” according to Khalid Okasha, an independent security expert and retired police officer.

Okasha believes that with the gradual upgrade of the police forces, the percentage of such crimes has recently started to get back to the normal range.

“When the interior ministry realises [achieves] a quantum leap in its performance and stops hunting down terrorism and the Muslim Brotherhood members….which consume most of its time and effort, the police will be more [focused] in dealing with the security situation [on the street],” he added.

Police violations after the revolution

On 30 June 2013, citizens and the police joined forces during the nationwide protests that led to the military ousting of president Mohamed Morsi.

At that time, both sides had the same goal – to depose a Muslim Brotherhood affiliate who failed to run the country or keep his promises to the people. But would that restore trust between them?

It is true that police violations were among the main reasons behind the flare-up of protests against the former regime of Hosni Mubarak. However, numerous infringements committed by security forces have been monitored by human rights groups since then.

The most recent of these violations was about two weeks ago when the prosecution ordered the detention of a police officer pending further investigation into the alleged attack of an army recruit in Al-Arish, North Sinai, that led to his death.

Before that incident, three police officers were suspended for tampering with the corpse of a registered criminal at the morgue of Al-Khanka Hospital.

“There is no security body in the world without mistakes,” Okasha argued.

“These are individual flaws…and the prosecution ordered the detention of the alleged perpetrators,” he added.

Aida Seif Al-Dawla, executive director of Al-Nadeem Center for the Rehabilitation of the Victims of Violence and Torture, considers it inevitable that the interior ministry must be purged.

According to Seif Al-Dawla, who is also a psychiatrist, “the human rights situation in Egypt is now even worse.”

“We are going through an era even worse than the time before the 25 January Revolution,” she said.

Based on a report released by Al-Nadeem in June 2014, there have been 14 suspected cases of murder and deaths inside prisons throughout the previous year. The report further mentioned several monitored cases of torture of political detainees at detention centres and prisons.

“The status of human rights has been worse since 3 July [2013] in terms of the violations committed and the practices…for the first time there are 19 detained and imprisoned journalists at the same time…and minors handed down death sentences,” said lawyer Gamal Eid.

Eid still has a glimmer of hope though.

“The situation is better in terms of people’s awareness and resistance…there will be suppression if a state of surrender exists,” he said.

Relations between citizens and the police

The 25 January Revolution is believed to have caused a rift between the citizens and the police. At some point, citizens were angry towards the frequent violations allegedly committed by the police against the people before the revolution.

Following the Friday of Rage, the people felt that the police no longer had the same power over them.

Many questioned the role of the interior ministry in securing the country, while at the same time they raised a looming question: did the relationship between citizens and the police deteriorate after the revolution?

“The public relations department (at the interior ministry) must develop its performance to change the (stereotyped) image of policemen in people’s minds,” said Fouad Allam, a retired police general and the ex-deputy head of the state security agency.

“For example, the interior ministry should immediately release a statement in case a violation is committed by a policeman to maintain transparency,” he added.

Allam further suggests that the interior ministry depends on educated policemen rather than the uneducated army recruits who represent over 80% of police forces.

“If educated policemen are trained and deployed on the streets, the police performance will differ to a great extent,” Allam said.

“Police officers further need to receive special training on different levels about how to deal with citizens,” he added.

However, Okasha has a different view.

“Tension will remain between the people and the police…if it has to do with violations….or a deficiency in handling security, Okasha argued.

“The interior ministry has to work on such issues…but in general, the relationship between the citizens and law enforcement is not always good in any community,” he added.

“There is currently no political will…in terms of the purge of the interior ministry, accountability and the end of torture,” she argued.

“The relation between the two parties will get better in case a miracle happens…and (policemen) respect the law, which could take place in a utopia,” he said. “The prosecution performs its role more effectively and allow nobody to escape punishment,” said Eid.

After Morsi was removed, followed by the dispersal of the pro-Muslim Brotherhood Rabaa and Al-Nahda sit-ins, militant attacks escalated nationwide.

Allam called on the government to provide life insurance that guarantees a policeman’s family would receive proper care if he is killed in action.

According to Allam, if such guarantees are made, policemen will perform their duties in a better manner.

Policemen have been the target of numerous attacks since the ousting of president Mohamed Morsi in July 2013.

Dozens of militant operations were carried out across Egypt, especially in Cairo and North Sinai, over the past 14 months. They were mostly carried out by the North Sinai-based jihadist group Ansar Beit Al-Maqdis (Supporters of Jerusalem).

The militant group is believed to be divided into two wings, one in North Sinai and the other across the Palestinian border in Gaza City.

Several operations targeted Egyptian civilians and tourists as well, which made many European countries issue travel warnings to their citizens for visiting Egypt.

In August this year, the UK said on the official government website www.gov.uk that there was a “high threat from terrorism” in Egypt.

On 16 February 2014, four people were killed while 17 others were injured in a terrorist attack against a tourist bus in Taba, South Sinai.

Moreover, the UK’s Foreign and Commonwealth Office (FCO) advised against all travel to North Sinai as well as against all but essential travel to Beni Suef, Minya, Assuit, Sohag and South Sinai, with the exception of the area within the Sharm El-Sheikh perimeter barrier, which includes the airport and the areas of Sharm Al-Maya, Hadaba, Naama Bay, Sharks Bay and Nabq.

The FCO further warned against the places within 50 kilometres of the border with Libya (excluding the town of Siwa) and the desert areas in south-west Egypt, including the oases in Farafra, Dakhla and Bawati.

Even though Allam believes that militant attacks have diminished over the past few months, he suggests that the government needs to change its technique of counteracting terrorism.

“Security operations in North Sinai have achieved (noticeable) success compared to (the situation) after June 30 [2013],” said Okasha. “June 30 is the criterion on which we measure the (performance) of their performance.”

Nonetheless, Allam has a novel initiative with regards to combating insurgency.

“Rather than just depending on the security solution, there should be a radical way to fight the roots of terrorism….it should be tackled on economic, political, cultural, media, social and religious levels,” Allam said.

“There are studies that explain [this theory] at the national security agency,” he added.

President Abdel-Fattah Al-Sisi was running a major counter-terrorism operation in North Sinai when he was defence minister under Morsi. The operation continued after Morsi was removed and Al-Sisi became the deputy prime minister for security affairs and later the president.

In a recent televised speech, Al-Sisi vowed to continue combating militancy in North Sinai. However, he didn’t give a timeframe as to when the security situation in the peninsula will improve.

Al-Sisi said that security cannot be restored “overnight”, in reference to the ongoing wave of attacks on security forces in North Sinai.