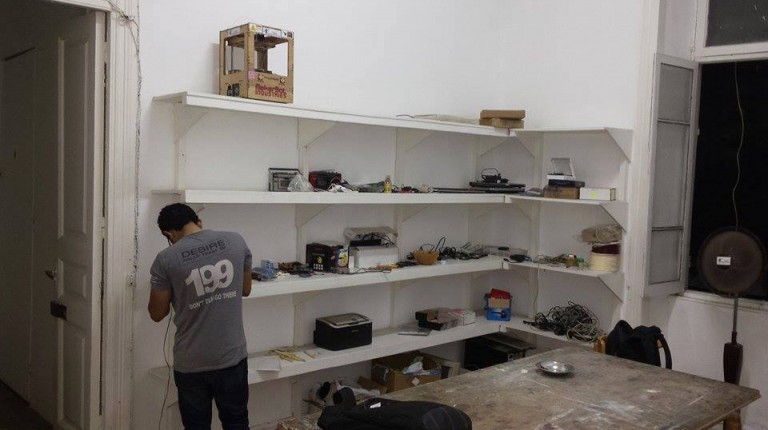 The electricity goes off, and darkness fills the old building. Tarek grabs a bottle of water, peels off the cover and puts it over a small lamp in cardboard box, instantly creating an emergency light.

This simple tool is one of many “hacks” that “Cairo Hackerspace” develops to offer solutions to problems they encounter.

“Sometimes you’re on the road and you tell yourself ‘why don’t they do so and so’ [to solve this problem],” said Tarek Ahmed, co- founder of Cairo Hackerspace. “If you imagined it then you can do it yourself.”

The word “hacker” originally referred to anyone with innovative ideas, but since the emergence of computers and complicated banking systems, the term has been used to describe people who disrupted these systems for robbery, he said. A “hackerspace” offers a place for hackers of any discipline, such as technology or art, to experiment and develop projects.

“I learnt everything I do in the hackerspace,” he said. “You know how we, as kids, were innovative- [but when we grow up] we kind of stop using our own minds.”

Cairo Hackerspace, which was founded in 2009, hosts a wide range of projects involving multiple disciplines, such as electronics and biohacking.  In one of their projects, the team used two digital cameras to create a book scanner that can digitise an estimated 700 pages in 30 minutes. The book scanner was used to scan historic Arabic books in the Library of Alexandria.

Other projects include workshops discussing encryption and securing computer data, as well as the production of biofuel, such as bioethanol and biodiesel, at home.

Inspired by their graduation projects, the co-founders initially started their open-source lab with no physical space. Instead, the five friends used to meet up at a coffee place. Ever since, the group, which now has around 10 members, has been moving between places.

“We went through everything that could happen,” Ahmed said, “we always wanted to have a place Downtown but we could not afford it.”

In 2012, Townhouse Gallery hosted Cairo Hackerspace in its First Floor Gallery, with the group holding a series of workshops and activities over the course of ten days. In one workshop, participants used an “Egg-bot”, a machine with a rotating egg and a fine pen, to print patterns on spherical objects as Ping-Pong balls and eggs. Other activities involved using microcontrollers in art work, soldering digital devices and Arduino, a simple electronics platform which is used in various devices, including interactive art work.

Cairo Hackerspace will return to Townhouse to reside in one of its studios in a busy mechanics district in Downtown.  The small square studio is full of innovative machines lying on shelves along with a stack of stickers that read “Hack like an Egyptian”, and a busy working space over a table in the middle.

A 3D printer “Maker-bot”, a machine that can create three-dimensional objects from a digital design, lies on a side table.  A projector made using a piece of an old used up phone screen, a magnifying lens and a shoe box, stands side by side with the electronic microscope made out of an old webcam, which he tries on to show the details of his computer screen.

To launch their new “pop-up” space, the hackerspace will hold two workshops, “Free Electricity” and “Electronics and Circuit Hacking”, which will be open to anyone for free.

The participants will create a “Joule Thief”, a simple device that allows the consumption of the left over energy in consumed batteries. Power banks, which will be created in the workshops, can act as wireless charges to electronic devices, such as cell phones.

“During the two days we will do fun, simple stuff,” Ahmed said, “we will produce electricity for free.”

Besides the power generation, participants will experiment with Arduino and will create digital graffiti of LED throwies, small coloured light units that can stick to metallic surfaces.