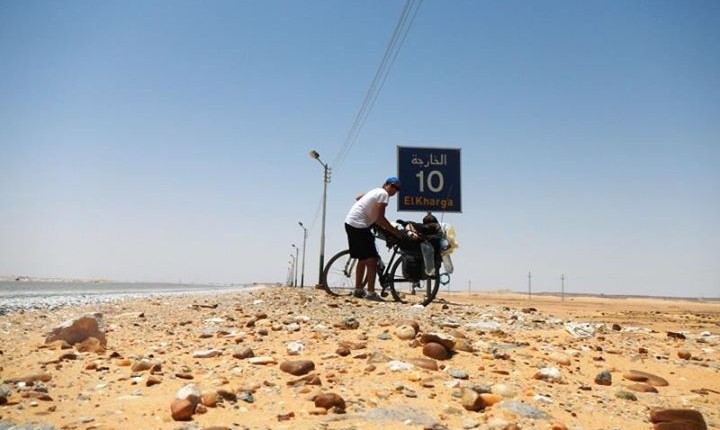 The academic year is about to start. Galal Zikry-Chatila will not buy school supplies or study for admission tests; he will buy camping gear and study road maps.

Instead of preparing for the new academic year, the mass communications student is preparing to hit the road and travel all around Egypt by bicycle. For five months, Chatila plans to travel a distance of over 8,000 kilometres by himself and film his journey.

Since his early teenage years, Chatila has been travelling around the country. Walking to Suez and cycling to Ismailia with his school friends inspired the young Cairene to cycle to Ain Al-Sokhna alone at 18, despite security risks on the road following the 25 January Revolution.

“I was told that thugs stopped people on the road,” he said, “but I told myself we can’t live in constant fear of anything that could go wrong.”

Chatila’s first ride inspired his aspiration for longer travel, but fear and lack of confidence stood in his way at first.

“I heard about someone who cycled to Nuweiba, but I thought he is well-trained and I’m not like him,” he said. “It seemed impossible.”

“Breaking the impossible,” Chatila, who did not own his own bicycle, made the three day trip to Nuweiba using a friend’s bicycle.

“What I saw on the road, the nature, the people–I had never seen [this] before,” he said. “I broke my own limits.”

While travelling the 700 kilometres between Cairo and Nuweiba, he had new experiences and met new people, Chatila said.

“People in the city scare each other off because they are used to the percentage of evil being more than that of good,” he said. “But those who live in the middle of nature know that good is much more.”

In his diary, the traveller records incidents being offered help from strangers and reflects on his “spiritual experience” while travelling.

“Is it impossible to reach 8,000 kilometres around Egypt?” Chatila said, describing his first response to the idea. “I doubted myself.”

To “test his abilities” and “get to know himself”, he decided to cycle from Cairo through the Western Desert, a 19-day ride.

“It was the first step towards my big challenge,” he said.

Chatila bought a bicycle and got in touch with adventure travel professionals and emergency support providers. He started an online blog to “experiment with his writing skills”.

“I wanted to show that Egypt is not just Cairo,” he said. “The interaction was surprising.”

Since May 2013, Chatila’s personal challenge took a “more professional scope”. He recorded a short teaser video, Egypt on two wheels, describing his project and started fundraising for it.

As a part of his preparation, Chatila, who took a semester off college, studies maps and marks spots where supplies, such as food and water, will be available. He uses maps to calculate how much supplies he needs for 150 days of travel. Supplies, including canned food, camping gear, warm clothes and a rug, are all packed in five sacks mounted onto his bicycle.

“There is usually something—people driving, a deserted village, a check point,” he said, “but there are still some risky roads.”

Chatila, who does not consider himself a professional cyclist, travels by bicycle to feel “the traveller’s spirit”.

“Strangers host me everywhere,” he said, “this wouldn’t have ever happened if I travelled by car.”

The traveller, who is also a professional adventure trip designer, hopes that his project will inspire people to “go out of their comfort zone and try new things”.

“I don’t know if I will make it or not,” he said. “But following our hearts always leads us to the right decision.”