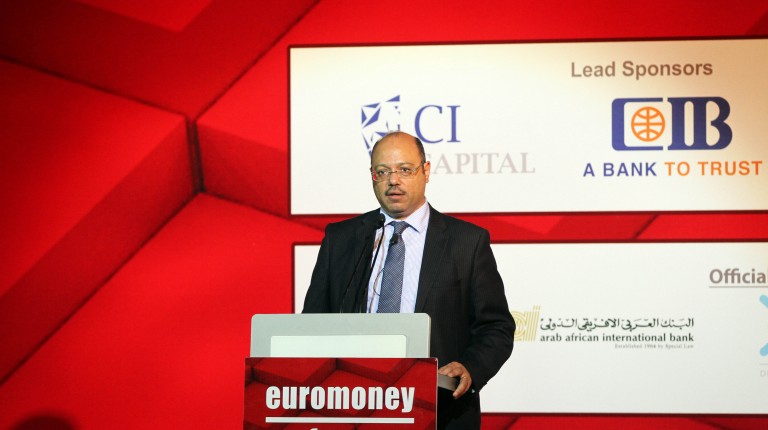 “We are working to build to a better future for the nation’s future, while also addressing immediate challenges with policies and programmes,” Dimian said on the sidelines of the Euromoney conference in Cairo. “Most important of all, we have the political will for real and serious change.”

He added: “We have made progress in the political arena, real economic reform is taking place, and we are working to rebuild the Egyptian economy by restoring confidence and setting out an economic plan aimed at achieving sustainable growth.”

Dimian said energy subsidy reductions lead to a better economic climate, and petroleum product prices will be affected next. He added that smuggling, which posed an extra burden on the state budget and increased its deficit, is now being tightly controlled.

“We have taken measures to expand the tax base and will implement sales tax reforms as well. We have adjusted property taxes and the customs system, and we also seek to change public spending,” Dimian added.

Dimian said that widespread social participation is the basis for success of these economic policies, adding that according to the constitution, the government is obliged to expand allocations for education and healthcare. This, he said, requires more revenue, which will be garnered through an overhaul of state resources and tight control of public spending.

Current laws stipulate that there will be no economic reform unless followed by social reforms to protect citizens from inflation, Dimian said. Major projects that are set to contribute to the economy are underway, such as the Suez Canal project, land reclamation and river transport projects.

Dimian added that the goal is to put Egypt on the global investment map once more. This, he said, will require policies characterised by credibility, and investment opportunities must be made available for all. Incentives must be granted and restrictions lightened in order to improve Egypt’s business environment.

Egypt will invite major international companies to sign deals during an upcoming economic summit next February, according to Dimian.

This transition stage is a difficult one, but Dimian said he was confident the future will be promising for Egyptians and hold profitability for investors.

Euromoney representative Richard Banks said Europe is suffering major economic troubles and also faces a difficult period. He explained that Egypt passed through difficult economic circumstances, but the current regime has the ability to restore growth and economic stability. The bold and courageous decisions taken by Egypt’s leadership entail risks, he said, but will speed up a restoration of confidence for international markets and business communities, both foreign and domestic. Banks stressed that Egypt is approaching 2008 economic indicators due to new decisions and policies aimed at reform.

In response to questions posed, Dimian said that bureaucratic obstacles exist and the government seeks to seriously address them. The ministry’s policy is to promote a free market with a role for government institutions, which entails fighting bureaucracy. However, successfully breaking down the culture of these government agencies will take more than just one year.

He said that the government is reviewing tax legislation, including the value-added tax (VAT), which will address the business community’s concerns, represented through a partial restructuring of taxes.

Dimian said that his goal was to allow the state to lead projects that the private sector finances. The private sector will be at the forefront of all upcoming projects and development initiatives for the industrial and logistical zones that will be offered for tenders.

”First, we seek to reform the legal landscape and place investment opportunities under the umbrella of private sector partnerships in the fields of roads, hospitals, and water desalination,” he said. “Currently, two water desalination projects are set to be offered for a tender under the partnership system during the next few days.”

Dimian added: “Growth rates are still low, but the general trend has been upward since the beginning of last year. We expect 3% total growth during the 2014/2015 fiscal year.”

One of Dimian’s main goals is to reassure the financial and business communities in supplying investments. He said there are indications that the Egyptian economy is improving and business institutions and communities are becoming more confident in the market.

“We are going through a very difficult situation and have taken crucial measures like restructuring the subsidy system,” Dimian added. “This move resulted in budget savings, and we are investing and working to achieve high growth rates of 5% over 3 years, which will entail a significant reduction in the unemployment rate.”

Dimian said that new major projects will be presented to the private sector, who will implement the projects while the state creates a suitable environment for implementation. He claimed that industry rates were beginning to return to normal.

“We expect the deficit to be 12.5% during the 2014/2015 fiscal year, but without the kind aid of our brothers in the Gulf, that number would have jumped to 13%. We hope to bring this number below 11% and I expect that the deficit will touch 10.5% during FY 2014/2015. We want the future generations to inherit growth and investment opportunities, not debt.”

In preparing the budget, that aid would be reduced was taken into account, Dimian said, explaining that this meant that estimates for the deficit, growth, and debt were realistic.

Dimian hopes to implement projects that utilise smart energy during the coming months which will help subsidies be 90% removed within 3 years. The government is also focused on creating social safety nets protect low-income earners during the process of restructuring subsidies.

The government is gradually moving toward cash subsidies instead of in-kind subsidies by spending 10% on education and health care from the GDP by 2016 or 2017, the minister said, explaining that this measure would facilitate process.

He said that the government would ask the IMF to send a delegation to assess the economic situation ahead of the economic summit next February. The move is aimed at restoring the confidence of international markets and attracting investments to ease the unemployment crisis.

Dimian further said that Egypt is prepared to absorb any investment opportunities as long as the financing gap is filled, even if that means knocking on the door of international markets to offer dollar bonds.

He added that the government is seeking to restructure the education system and add training courses.