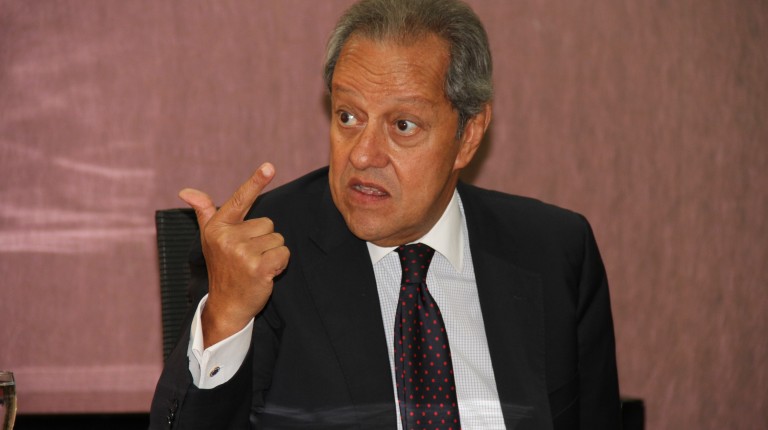 Minister of Industry and Foreign Trade Mounir Fakhry Abdel Nour told the Daily News Egypt in an interview for the Euromoney supplement that the law offering preferential treatment to local products will be referred to the presidency in September for approval. The minister, who also discussed the industrial lands and factory issues, stressed that Egypt will achieve $24bn in exports in 2014.

What are the government’s expectations from the Euromoney conference?

We are targeting regaining the confidence of investors and markets because Egypt needs at least 25% of GDP in investments and all the actions of the government are aiming to regain this confidence.

During the Euromoney conference, the government will discuss its economic policies including everything the government is doing to reduce the budget deficit, balance of trade and balance of payment (BOP) deficit and the deficit in GDP growth rates; we will focus on those three things.

The government will present, in the conference, the ongoing mega projects that need investments and that also will result in high economic growth rates. With regard to the budget deficit, we will state our fiscal policy that aims to increase the state’s resources, boost the budget’s revenues and reduce public expenditures such as the energy subsidies system that does not reach the neediest portions of the society.

The government is also working on trimming the balance of trade deficit through increasing exports and decreasing imports to fill the gap.

Our exports have significantly increased as they have registered a 24% increase last August compared to August 2013.

I also stress that we will achieve our target of reaching at least $24bn in exports in 2014 up from recording $21.5bn in exports in 2013.So the Egyptian exports have managed to increase despite the high energy prices that resulted in high production costs and the closure of many potential markets such as the Syrian, Libyan,Iraqi and Sudanese markets.

Speaking about the procedures that the government has taken in the regard, the draft law that stipulates granting preferential treatment to the local product will be issued and ratified in the next few days, and it will have a significant effect in reducing imports and thus balancing the trade balance.

Why did exports achieve only a 3% growth rate from January to August?

Because of the unstable security situation in the important markets to Egypt as I said earlier, and the energy crisis that has caused a decrease in production, but the surge that happened in August levels has raised hopes.

Does the law that offers preferential treatment to local products contradict the WTO trade agreements?

It does not contradict [them] at all, and who says that it contradicts them does not know the rules of the WTO. I would like to add that most of the world’s countries have that law that prefers the local product such as the United States, Russia, Canada, as well as Brazil, Turkey and other developing countries.

The law is approved by the cabinet of ministers and it will be sent to the presidency by the end of September for ratifying. The law will have positive effects on the industrial sector, trade balance and investments.

What does the law entail? Will it protect local products from smuggling for example?

The law is applied only in the scale of governmental purchases in the frame that is identified in the state’s budget and the government’s economic plan. There are other areas that come under “protecting the local product from unfair practices” that harm the consumer such as smuggling, adulteration, monopoly and all other practices that affect the competitiveness.

We already have a regulation that criminalises monopoly; meanwhile, the government is continuously meeting in order to find a solution that reduces smuggling and adulteration. In a parallel regard, we are working on raising the level of the Egyptian standard specifications, and on the other hand, improving the quality of the local product. Also there is supervision on imports, through the Egyptian Exports and Imports Supervisory Authority, which checks that products meet the imposed specifications.

How the ministry is solving the problem of unavailability of industrial lands?

The unavailability of lands was forming one of the most problems that challenge the Egyptian industrial sector and especially investments. In that regard, we are about to sign a protocol with the New Urban Communities Authority (NUCA) that would allow the industry ministry and the Industrial Development Authority (IDA) to act in allocating the industrial areas to businessmen, supervising their development, selling them, conducting an usufruct contract for them, collecting their values or managing and them on the behalf of NUCA. There are no hurdles in implementing the to-be-signed agreement and the Prime Minister himself is insisting on implementing it.

Will the regulations of allocating lands be changed after the agreement takes effect?

The regulations of allocating the lands will be reviewed especially their selling or renting prices for foreign or local investors; because we eventually want to encourage and attract investors [and] especially reduce the burdens they suffer from at the beginning of their investment activity.

Are there any intentions to offer privileges to industrial lands in Upper Egypt and remote areas?

Not only intentions, but there are real steps on the ground. As per a decision taken by NUCA’s board of directors, the prices and usufruct rates of lands in Upper Egypt will be much lower than of those in Cairo and Lower Egypt.

Will the government depend on the usufruct system in the next period when allocating lands?

Not necessarily, but it will be one of the government’s tools, and we will give the investor the choice of how he wants to use the land; on usufruct basis or selling basis.

The government will also weigh which system it prefers according to the location of lands and the nationality of the investor [whether local or foreign], but we will be flexible as much as we can.

What is the ministry doing in order to support and reopen insolvent factories since the January 2011 revolution?

I highly stress that it is not my ministry’s responsibility to solve the insolvent factories issue; they are just companies that have financial problems, so who can solve this problem are the financial institutions and the banking sector. What I can only do is study these problems to refer them to the banking sector, nothing more.

The ministry-affiliated Industrial Modernisation Centre can help factories if they are facing technical or marketing hurdles, but if the hurdle is a financial one then it does not fall under our responsibility.

The EGP 500m that was allocated in the government’s economic stimulus package last year, to help 170 factories out of 952 insolvent factories, were not used by banks because the governor of Central Bank of Egypt Hisham Ramez said that the 170 factories are listed in banks’ “blacklist” so the sector cannot lend them.

Are you considering allowing rice exports?

The government, represented in the ministries of Agriculture, Supply and Industry, is now studying the conditions to allow rice exports, and the decision will be taken within days.

The most important thing before taking this decision is ensuring that the supply ministry has enough rice quantities to meet the needs of the local market, with reasonable prices that do not burden the budget.

Did Egypt receive any warning from the European Union regarding dealing with Russia?

I think the European Union (EU) and the US are not happy with boosting the relations between Egypt and Russia.

What are the new laws the government is preparing to stimulate the market?

There is a long list of laws; we need to finalise the law that should organise micro-financing process, and it is a very important law in my point of view.  There is also a law that targets attracting workers in the non-formal sector to join the formal sector through offering them incentives such as financial and technical support and also we might study offering them tax exemptions and facilitate the process of obtaining business licences. There are many models in other countries that we are studying; in that regard, an international delegation will come to Egypt next week and we will hear the experiments of different countries in that area.

Are you going to impose protection fees on imported steel?

I have received requests from local producers to impose protection fees on imported steel. The decision is not easy as I have to take the side of local products and I also have to consider the benefit of producers as well as consumers, so I have to carefully study the situation not to harm any of both sides.

According to the law, such requests should be submitted through a representative portion of this sector, steel production, to berepresentable. The percentage of local suppliers, who have stated that they have been harmed from steel importing, were not representable, and the statistics they have shown me do not indicate that they were harmed by steel imports, which represents only 10% of steel market in Egypt in the first half of 2014.

Are you considering issuing new licences for operating in the steel and cement industries?

We did not study that, especially because the country is suffering from a huge energy crisis. The ministry is working under very hard conditions, and the industrial sector is the most negativelyaffected sector by the current turmoil as it had suffered from low quantities of energy supply and it is the most harmed sector by increasing the prices of petroleum products. However, by the end of 2014, we will be able to meet the energy demands of factories. Through the coming two years, we will witness an improvement in oil and natural gas production due to the new investments pumped in the energy sector and also the new potential investment opportunities in the areas of natural gas, oil, solar energy and coal.

What are the procedures the government has already taken to lure investments?

A lot of things; the recent reforming of the subsidies system is enough. Also the approved law which prevents third parties from challenges contracts between the government and investors, in addition to the launching of national projects such as the Suez Canal Axis Development Project and the new Suez Canal project.