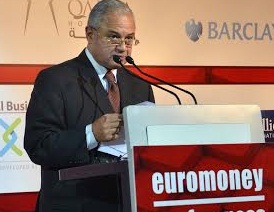 Ministry of Tourism will offer investment opportunities in the north coast during the Economic Summit, which will be held in February 2015, Minister of Tourism Hisham Zaazou told the Daily News Egypt on the sidelines of the Euromoney conference on Wednesday. The minister added that the around 3,500 feddans of land will be offered.

An official source at the ministry also revealed to the Daily News Egypt that the ministry is targeting EGP 19bn and will be offering around 28m square metres in the north coast area.

The government is doing its best to remove barriers inhibiting local and foreign investments in Egypt, the minister said, adding that they are tackling the bureaucratic issues and procedures in public and governmental entities.

“The government stresses that the private sector has a lot of opportunities,” Zaazou said, adding that investors should feel a sense of urgency to invest in Egypt.

During his speech, Zaazou also revealed his ministry’s plan to attract 40 million tourists in the coming period, which will generate $25bn in revenues.

The government and investors should unite to put Egypt back in its “real position”, Zaazou said, stressing the country is “back on track”, adding that the country is a hub investment, tourism and technology sectors.

Zaazou mentioned that the government is also taking steps to secure the energy supplies, “not only fuel and LNG supplies but also we are encouraging to invest in solar energy,” he said.

Zaazou promised that the government is committed to achieving a high growth rate and to improve the living conditions of citizens, mentioning that the government has already taken steps through adopting economic reforms such as reducing fuel subsidies.

During the speech, Zaazou said that the theme of the Euromoney  conference, which is Stability, Investment and Growth, has summed up the aims of the government, but he added that they have higher aspirations than these goals.

The government approved on Wednesday the ‘feed-in’ tariff system which will allow both individuals and investors to gain contracts in creating electricity from new and renewable energy sources, Zaazou announced.

With regard to legislation reforms to attract investments, Zaazou said that the government has already amended the investment law in a way that prevents third parties from challenging contracts between the government and investors.