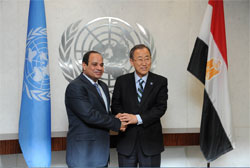 Ban’s concerns relate to “the absence of due process for detainees and sentencing of journalists in Egypt”, according to a summary of the meeting provided by the UN. The Secretary General also “called for the release of those detained solely for exercising their right to freedom of expression and association”.

During the meeting Al-Sisi took the opportunity to “correct some misconceptions… when dealing with the internal affairs of Egypt”, according to a Monday presidential statement. Al-Sisi highlighted the independence of the judiciary “in full accordance with the principle of separation of powers” adding that this is “guaranteed by the constitution”.

Prominent activists were released earlier this week including Alaa Abdel Fattah, on EGP 5,000 bail, and Mahienour El-Massry was ordered to be released following an appeal of a six-month sentence. There are approximately 90 people in Egyptian prisons currently on hunger strike in protest against their detention. More than 200 activists are striking in solidarity with those in prison.

Ban praised the “important regional role played by Egypt in recent months”.  The pair also discussed ways of deepening cooperation on issues such as Gaza and Libya. “Both agreed on the need to make the ceasefire for Gaza sustainable and for a political process to achieve durable peace”, according to the summary adding that the “cycle of destruction must end”.

Al-Sisi also met with Jordanian monarch King Abdullah II in New York and discussed the “international fight against extremism and terrorism in the region”. The pair discussed the current developments in Iraq, Syria, and Libya. They also discussed Egypt’s role in the Gaza ceasefire and the upcoming indirect talks between the Israelis and Palestinians.

The President arrived in New York on Sunday to head Egypt’s delegation to the 69th General Assembly and is expected to talk at Tuesday’s Climate Summit and address the assembly on Thursday as part of the general debate.