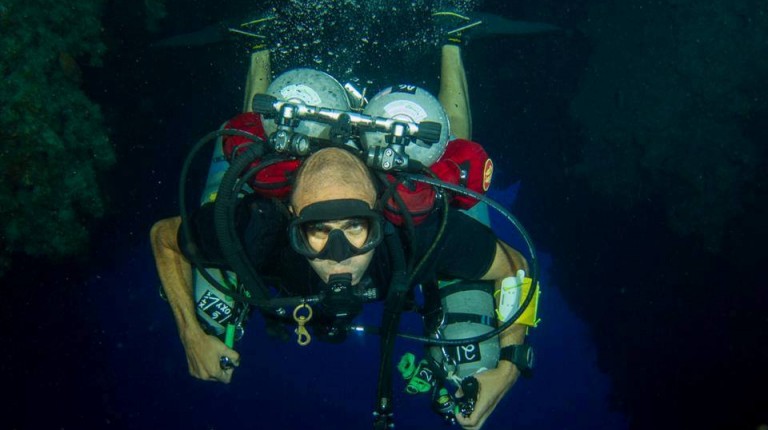 The Egyptian diver Ahmed Gabr has officially broken the world record for the deepest scuba dive, reaching a depth of 332.35 metres – 16.75 metres deeper than the previous record.

Gabr spent almost 14 hours under water in Dahab, despite the fact that he had already reached the 332.35 in the first 12 minutes.  The purpose of the diver’s slow ascent is to avoid potential risks that threatened his life.

Under high depths, divers face risks of high-pressure nervous syndrome, a neurological disorder that can afflict divers under depths of 150 metres, leading to tremors, disturbed vision along with other neurological problems. Another risk divers face is isobaric counter diffusion, which causes breathing difficulties.

Despite the risks, Gabr said earlier that he is willing to act as a “lab rat,” originally aiming for a depth of 350 metres, in order to prove that a human can survive under such depths.

Gabr, who surfaced from his dive in the early hours of Friday, was handed a certificate by Talal Omar, Guinness World Records representative in the Middle East.

Although Gabr, fascinated with the sea, has dreamed of becoming a diver since he was a child, he didn’t enrol in his first diving course until he was in college. His family could not afford the expenses of such an “uncommon” sport in Egypt at that time, he said.

It didn’t take him long to go professional, however. By age 18, he had started his career as a diver. Gabr then became a diving instructor and now he also trains instructors.

The diver has been aiming to break the world record for four years. A year ago, Guinness records accepted his application.