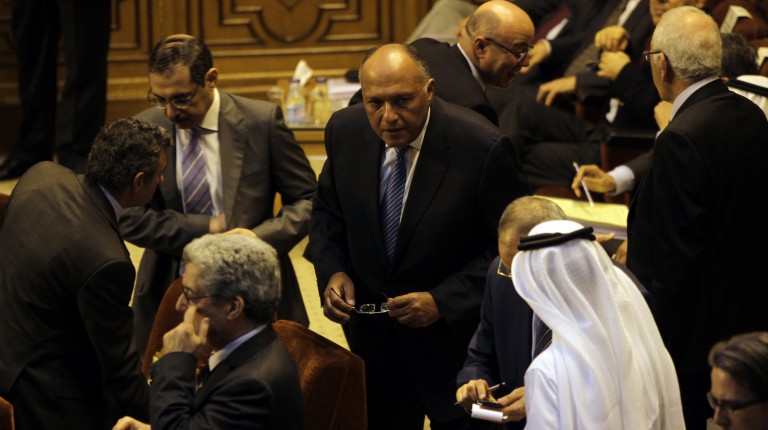 Foreign Minister Sameh Shoukry noted that utmost importance should be given to preparing the Palestinian state to become politically and economically independent during a meeting of the Ad Hoc Liaison Committee (AHLC) on Monday.

Shoukry claimed that intensive Egyptian efforts have had a significant impact on reaching a ceasefire agreement, and stressed the need to focus on the overall framework to resolve the conflict, especially in the light of the current situation with the absence of any political horizon for ending the occupation and establishing an independent Palestinian state.

The minister was part of the delegation that accompanied President Abdel Fattah Al-Sisi on 21 September in his visit to New York to participate in the 69th session of the UN General Assembly.

On the side of the UN General Assembly, Shoukry was planned to attend more than 20 organisational meetings.

Shoukry met with a number of his counterparts, including the Secretary of Foreign Affairs of Italy, and the foreign ministers of Cyprus, Greece, Algeria, Sudan, Ethiopia, Portugal, Slovakia, North Korea, Eritrea, South Sudan, India, Brazil, Albania, and Lithuania.

He also met with US National Security Advisor Susan Rice and discussed regional and international issues, focusing on the Palestinian issue and the situations in Syria, Iraq and Libya, as well as ways to combat terrorism.

Shoukry also attended the ministerial meeting of the Coordination Committee for Africa-Arab Partnership on Monday, which works on the implementation of the decisions agreed upon in Arab-African summit held in Kuwait in November 2013 which has to do with bilateral relations between Egypt and African countries.

During the meeting, Shoukry discussed the Egyptian efforts to reach stability in Libya as well as Palestine, and the Egyptian government’s efforts in peacemaking in the African continent.