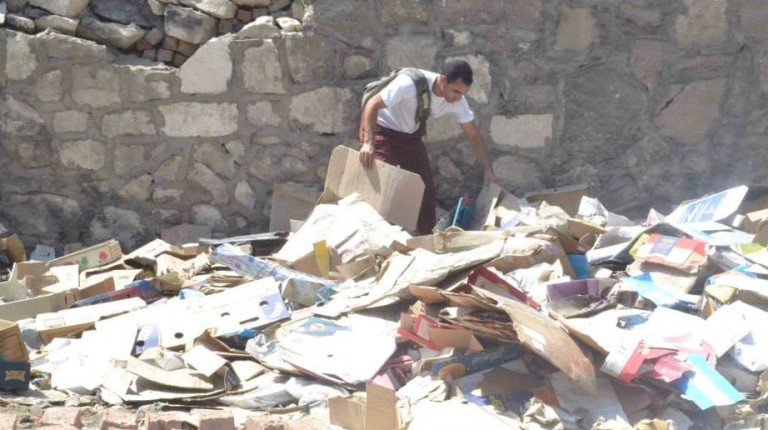 Instead of red bricks and concrete, volunteers of Ezbet project use mud bricks made out of paper, gravel and other recycled material as well as plastic bottles to build houses.

The project, which was launched by a group of students in Ezbet Abu-Qarn neighbourhood, aims to provide basic urban facilities for the slum through building a community centre. The centre, which will be built out of cheap, durable material, will act as a “prototype” for neighbourhood houses.

Ezbet Abu-Qarn is one of many slums spread across Cairo. More than fifteen million people live in slums across Egypt, around 40% of them live in Greater Cairo, according to a report by the National Population Council.

The project follows a participatory model, which is based on involving various stakeholders in the development process.

The project uses inputs by residents of Ezbet Abu-Qarn about their needs and expectations. Städtebau Institut Stuttgart and the Urban Planning & Design Department of the Faculty of Engineering, Ain Shams University are the project’s academic partners, providing technical expertise needed for project planning, and supervising the project’s execution.

Project volunteers, who are mostly engineering students, contribute with innovative ideas and efforts to execute them. In return, they acquire skills in their fields of specialisation, said Noha Anwar, Ezbet project coordinator.

In addition to developing the urban structure of the neighbourhood, Ezbet project works in three fields: education, health and vocational training, she said. The project team is undertaking a survey to find the industries that were once successful in the neighbourhood.

“We want to bring them back,” she said.

The community centre will offer training in these industries. Ezbet’s team will also build markets to sell these products in “more commercial” spots, such as the touristic area around Amr Ibn Al-A’as mosque, she said.

Besides training, the community centre will serve as a hub for all project activities, and as a meeting space for the neighbourhood residents to discuss their problems and ideas.

“It will be a new public space,” she said. “Volunteers working in the neighbourhood for over 10 years have never found a place to hold their activities.”

The project team will revive “traditional techniques” in building the community centre, said Radwa Rostom, who manages Handover, the housing subdivision in Ezbet project. The model will be copied to provide housing solutions for the neighbourhood residents in the future.

“We will talk to the residents about why we’re using these techniques and know their expectations,” she said, “there will be a loop going back and forth between the students and the residents.”

Due to lack of resources, the project cannot provide houses for all families, she said. Families will participate in the process of building the new houses, which will provide income to enable them to afford housing expenses.

“They will pay instalments for 10 years,” she said, “this will give them a sense of ownership and ensure justice between all families.”

41% of slum population that lives in Greater Cairo

27 seconds The interval between each new birth in slums

75% of urban population growth is in slums

88% of slum families are dependent on women