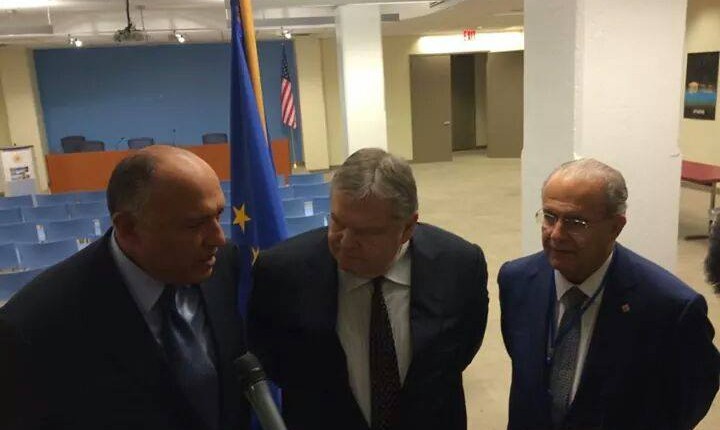 In the light of a policy agreement among Cyprus, Egypt, and Greece, the Egyptian Minister of Foreign Affairs Sameh Shoukry met with his Cypriot counterpart Minister Ioannis Kasoulides, and the Greek Deputy Prime Minister Evangelos Venizelos.

The second annual meeting in New York City on Friday between the countries reaffirmed bilateral relations on regional issues of instability.

A concerned eye was focused on Libya, Iraq, Syria, the Palestine-Israel conflict, and the threat of terrorism.

The three ministers stressed “the importance of the eastern Mediterranean becoming a pillar of stability in the wider area, by promoting cooperation among neighbouring countries,” a joint statement said.

The three countries continued in “their support to the government and the people of Egypt in their quest for a prosperous and democratic country”, and expressed solidarity “in their fight against terrorism”.

They praised Egypt for “its invaluable sponsorship of the ceasefire in Gaza reached in August,” stressing the need for negotiations between the Israelis and the Palestinians.

The 51 day conflict saw the death of over 2,100 Palestinians and 72 Israelis according to the United Nations.

They noted the importance of Egypt as a bulwark against regional instability, especially regarding the rise of militant groups in Iraq, Syria, and Libya.

In the case of Syria they called for a comprehensive political solution that would fulfil “the aspirations of the Syrian people”.

On Libya, they also called for an immediate cessation of hostilities and stressed a need for political dialogue amongst the different factions under a United Nations framework.

Concerning the Islamic State of Iraq and Sham (ISIS) with its “gross violations of human rights and the targeting of minority communities”, taking place in Iraq and Syria, the ministers called for collective action by the international community.

On the prospect of a united Cyprus, the ministers continued their support for “confidence building measures” and for ongoing efforts based on United Nations resolutions, which would be beneficial for all Cypriots and the whole region.

The ministers expressed satisfaction regarding the ability of “their respective governments to work closely together and to enhance their cooperation in all fields of mutual benefit,” the statement said.