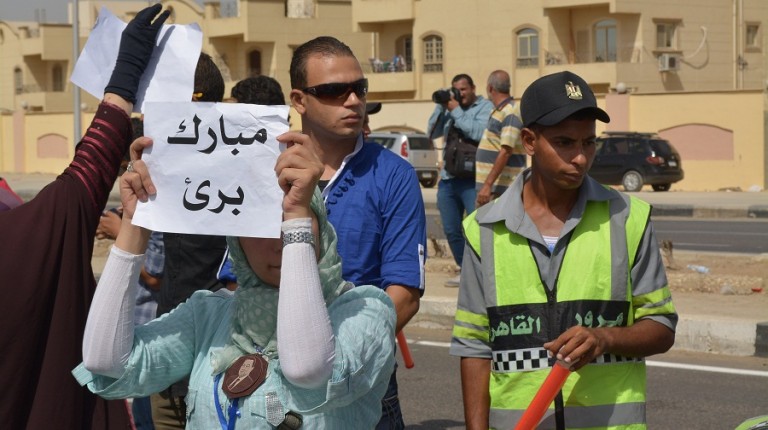 Relatives of those killed in the 25 January Revolution said that the judiciary is controlled by the state and is politicised, after the Cairo Court postponed its verdict on the retrial session of ousted president Hosni Mubarak on charges of killing of peaceful protesters to 29 November.

A group of Mubarak opponents, families of those killed, and members of the Coalition of the Revolution’s Wounded gathered from early Saturday morning in front of the New Cairo’s Police Academy demanding the execution of Mubarak and of former interior minister Habib Al-Adly.

Ahmed El Saed Ibrahim was wounded during the Friday of Rage, on 28 January 2011, in the city of Mahalla. “We are here today to demand a fair trial and that Mubarak be executed. The evidence is clear-cut. The whole world saw the Egyptian police killing protesters in the streets.”

Ibrahim added that, if Mubarak is not sentenced to death, hundreds will take to the streets in anger demanding justice. “There are over 500 families who lost members in all governorates of the country. If they are not satisfied, we will have to hold revolutionary courts where justice will prevail.”

A middle-aged woman expressed her sadness over the loss of her only son during the revolution and demanded that the former interior minister and Mubarak must be hanged.

Ibrahim and others were disappointed after hearing that the trial was postponed. “This is a powerful proof that the Egyptian judiciary is controlled by the state and is politicised,” said Ibrahim.

As the crowds reacted to the news of postponement, clashes erupted between pro and anti-Mubarak protesters, leaving two with minor injuries.

An anti-Mubarak protester claimed that state security agents in civilian clothes were trying to arrest him during the clashes. He also claimed that the police are guarding the Mubarak supporters, while leaving the opponents unprotected.

Tens of Mubarak supporters gathered to demand the release of the former president, amid the presence of heavily armed anti-riot police. They argued that the Egyptian people should not put a “war hero” and a “president who served the country for more than 25 years” on trial.

Others described the 25 January Revolution as a plot engineered by the Muslim Brotherhood to agitate the masses against Mubarak. “The incidents revealed who was loyal to the country and who was a traitor.”

They said that the 18 days of the revolution were a conspiracy by the US and what they called the “Zionist entity” to endanger the security of country.

Um Ashraf, a Mubarak supporter, said that during the 30 years of Mubarak rule, the country did not witness any war or chaos. “All the witnesses confirmed that there were militants in civilian clothes who participated in killing the protesters.”

Before hearing the court’s decision, one journalist was attacked and had his camera confiscated by Mubarak supporters as they demanded that he delete his footage.