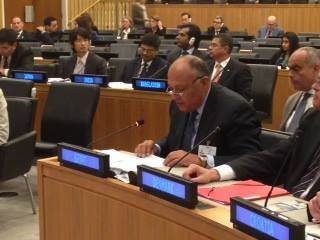 Foreign Minister Sameh Shoukry participated in discussions and meetings on regional and international issues in New York including Libya, Syria, Iraq, and Palestine, and the efforts to establish the Middle East as a zone free of nuclear weapons.

Foreign ministers of the countries neighbouring Libya, including Shoukry, met on Friday with the Secretary General of the Arab League Nabil El-Araby and the African Union Commissioner for Peace and Security Smail Chergui to discuss the situation in Libya. The meeting addressed the “overall political and security situation in Libya and ways out of the current impasse”.

Egypt was a signatory to a joint communiqué last Monday calling for ceasefire in Libya and expressing support for the Libyan House of Representatives in the face of the Islamist dominated General National Congress that has attempted to establish a rival government.

Shoukry also spoke at a ministerial meeting of the UN General Assembly on the issue of nuclear disarmament. He stressed that “we cannot talk seriously about international nuclear disarmament without the aim of creating a zone free of nuclear weapons in the Middle East”. He pointed out that Israel “remains the only country in the Middle East” that has “refused” to sign the international non-proliferation treaty. He called for “activating the mechanisms of the United Nations” in order to advance efforts to negotiate an international treaty “to halt production of fissile material for nuclear weapons” as well as addressing the “existing stock of such materials”.

Shoukry held a bilateral meeting with his Russian counterpart Sergey Lavrov on the sidelines of the 69th United Nations General Assembly on Friday. The pair had an “in depth” discussion regarding the current situation in Libya, as well as the status of indirect talks between the Palestinians and Israelis, hosted by Egypt.

The Russian and Egyptian ministers agreed to “intensify meetings at high levels” with the aim of increasing cooperation between their two countries.

Shoukry met on Friday with his Austrian counterpart Sebastian Kurz and discussed developments in Egypt including security and enhancing economic cooperation between the two nations as well as recent developments in the Middle East region.