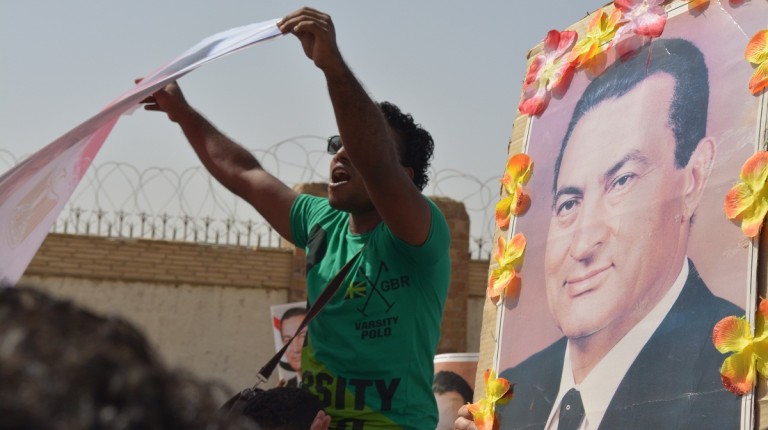 Judge Mahmoud Kamel Al-Rashidy postponed on Saturday the issuing of the verdict in the retrial of ousted president Hosni Mubarak, who is accused of ordering the killing of peaceful protesters during the 25 January Revolution as well as corruption charges.

Mubarak’s sons Alaa and Gamal, former interior minister Habib Al-Adly and six of his aides, and fugitive businessman Hussein Salem are accused in the same case that combines several charges.

Al-Rashidy was supposed to announce the verdict during this session, but he said the court needed more time to issue the verdict reasoning based on the 160,000 paper-case.

“It is the case of a nation…and not an ordinary disagreement…and the court realises this fact very well,” Al-Rashidy said.

Al-Rashidy ordered that Al-Adly will remain in custody while the six aides will be released pending the verdict.

In February 2013, the Cairo Cassation Court granted Mubarak and all his co-defendants a retrial in the charges against them.

The judge presented 1,600 pages during the session, representing 1% of the case files, out of which the judges will deliver the verdict reasoning, to be announced after the verdict is issued.

Lawyer Gamal Eid, head of the Arabic Network for Human Rights Information (ANHRI), said that the judge’s decision means other defendants will be released pending the trial.

“I don’t feel comfortable with the decision, but I am not surprised,” said Eid, adding that the court’s decision is part of a series of violations of the law sovereignty in Egypt.

Mubarak and his sons will remain behind bars over other charges related to corruption and exporting gas to Israel.

In May 2014, Mubarak was convicted in another trial of embezzlement and sentenced to three years in prison in the case dubbed “the presidential palaces”. Gamal and Alaa Mubarak were handed four year sentences in the same case. The three were ordered to pay back about EGP 21m and collectively fined about EGP 125m.

Lawyer Essam Al-Battawy, representing Al-Adly and his aide Ismail Al-Sha’er said: “The court was honest in front of the people as it made such a decision [in order to] take the time required to go through all papers.”

Al-Battawy further said the coming session is likely to be postponed as well.

“Generally speaking, the court has every right to postpone the verdict so as to take the time needed to review the documents; but it has to set a tight deadline for finishing this review,” Ahmed said.

At the beginning of the trial, Al-Rashidy presented a video recording of a TV show broadcast by the private Sada Al-Balad station showcasing the deliberation room where the trial judges meet and the case papers are stored as hard copies and on computers.

Ahmed described the video footage presented during the trial session as being “exceptional”. That is why it was not really important to showcase the documents of the trial through the media as “law doesn’t need any justifications”.

Al-Battawy criticised the video presentation the judge gave in the courtroom. “The court shouldn’t have allowed anyone to enter the deliberation room…any defendant can later contest the verdict claiming that someone messed with the evidence or papers at the room,” he argued.

Ahmed predicts that both Al-Adly and Mubarak will be handed down again life imprisonment sentences.

Legally, Mubarak, 86, cannot be sentenced to death as senior citizens above the age of 85 can only be imprisoned.

In June 2012, Mubarak and Al-Adly were sentenced to life in prison over the charges of ordering the killing of peaceful protesters, while his sons and five aides were acquitted due to the lack of evidence. Mubarak was acquitted of the corruption charges.

Mubarak ruled Egypt for three decades before he stepped down on 11 February 2011 following an 18-day nationwide uprising that demanded his ouster.

Al-Adly held the position of the interior minister during Mubarak’s reign for about 20 years.

Civil claims in the case, according to Al-Rashidy, are divided into three: the families of the killed protesters, the injured demonstrators, and the State Ligations Authority that demands compensations for the state properties damaged or destroyed during the revolution.

On 28 January 2011, dubbed the Friday of Rage, security forces tried to forcibly disperse hundreds of thousands of protesters in Tahrir Square with tear gas and live ammunition. They eventually lost control, ceding the streets to protesters.

Al-Rashidy stirred controversy after he said during the trial session that some people might doubt the court’s delay of the verdict to wait for the death of any of the defendants, referring to article number 14 of Procedural Law.

“I say it out loud that even if article number 14 was applied…we will still mention the verdict in the reasoning…and [we are not] procrastinating,” he said.

“The people were astonished that the judge mentioned this article because he didn’t clarify it fully,” Al-Battawy said.

According to Al-Battawy, the judge will issue verdict reasoning for each defendant, whether acquitted or convicted.

“In case of the death of a defendant based on article 14, his trial would be over. But the court will mention the verdict it indented to issue,” Al-Battawy explained.

Meanwhile, tens of Mubarak supporters gathered demanding the release of the former president Hosni Mubarak, amid the presence of heavily armed anti-riot police. They argued that the Egyptian people should not try a “war hero”, or “a president who served the country for more than 25 years.”

As the crowds reacted to the news of postponement, clashes erupted between the supporters of Mubarak and the families of the victims, leaving two with minor injuries.

One journalist was also attacked and had his camera confiscated by Mubarak supporters as they demanded that he delete his footage.

An anti-Mubarak protester claimed that state security agents in civilian clothes were trying to arrest him during the clashes. He further said that the police were guarding the Mubarak supporters, while leaving the opponents unprotected.

Others described the 25 January Revolution as a plot engineered by the Muslim Brotherhood to agitate the masses against Mubarak.

“The incidents revealed who was loyal to the country and who was a traitor,” one protester said.

Another said that the so called 18-day uprising was a conspiracy by the US and what they called the “Zionist entity” to endanger the security of country.