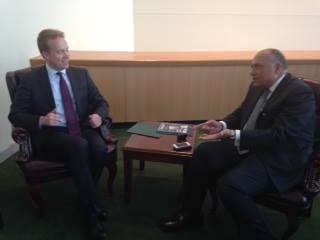 Egyptian Foreign Minister Sameh Shoukry and Norwegian Foreign Minister Borge Brende said they expect the 12 October conference on the reconstruction of Gaza to have “a great level of participation” and “success”, the Egyptian Ministry of Foreign Affairs said in a statement.

Shoukry met with his Norwegian counterpart “on the margins of his activities” at the UN General Assembly in New York on 27 September, the ministry said in its statement.

The two discussed details of how the conference, co-organised by the two countries and scheduled for 12 October in Cairo, is to be organised.

Brende made a trip to Cairo earlier this month to discuss Egypt’s role in maintaining truce between the Israeli and Palestinian sides.

According to the Palestinian news agency WAFA, the Norwegian minister said on Tuesday 23 September in a meeting with the Ad-Hoc Liaison Committee in New York, that the Palestinian issue is “in a critical phase”.

The upcoming months are crucial in regards to developments in Palestine, and donor countries should provide the necessary funding needed to rebuild Gaza, he said.

The Gaza Strip continues to suffer the repercussions of the damage in the aftermath of 50-day long Israeli attacks.

Commissioner General of the United Nations Relief and Works Agency (UNRWA) Pierre Krähenbühl previously said that there is a “crying need for financial support” in Gaza. He added Gaza needs at least $47m for the strip to be “just about bearable” pending full reconstruction.

The conflict began on 7 July and ended with an Egyptian brokered ceasefire on 26 August. Israel killed at least 2,149 Palestinians – including 942 women and children. The Israeli death toll was 69, including three civilians and one child.