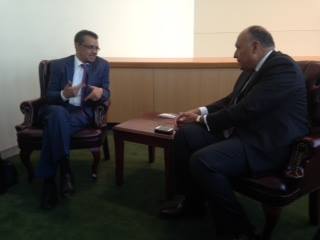 Egyptian and Ethiopian foreign ministers, Sameh Shoukry and Tedros Adhanom respectively, agreed to maintain momentum on the Nile water talks on Saturday as Shoukry assured Adhanom the Egyptian president is to make an official visit to Ethiopia, the Ethiopian Ministry of Foreign Affairs said in a statement.

Shoukry met with Adhanom and several foreign ministers of different African states on the sidelines of the UN General Assembly in New York.

Ethiopia is expected to host the fifth annual Joint Ministerial Commission in Addis Ababa on 1 November, where ministers will set an action plan regarding the Renaissance Dam, the Ethiopian Ministry of Foreign Affairs said.

According to the Egyptian Ministry of Foreign Affairs statement, the two ministers discussed developments in bilateral relations, especially in terms of “economic cooperation, trade, and investment.”

The two ministers also discussed “in depth” the regional situations in Libya and South Sudan.

Shoukry also met the South Sudanese Foreign Minister Barnaba Benjamin, and explained to him Egypt’s “increasing worries” regarding the “continuity of conflict and instability” in the country.

He reassured Benjamin that Egypt is “committed to supporting development programmes and the rebuilding of South Sudan,” the Egyptian foreign ministry said in a statement.

Ali Karty, the Sudanese foreign minister, also met with Shoukry who informed him that “Egypt has been carefully keeping up with national talks in Sudan.”

Shoukry expressed appreciation towards the African Union’s chief mediator Thabo Mbeki. “Egypt recognises the efforts he had been making with the opposition,” the Egyptian foreign ministry said, adding that it hopes for more “peace and national cooperation in Sudan”.

The ministry added that there has been a “positive momentum” regarding investments between Egypt and Sudan after the Egyptian president’s last visit to the Sudanese capital Khartoum.

Shoukry also met with his Eritrean counterpart Uthman Saleh, and the two discussed further strengthening bilateral relations between the two states in a number of different fields over the upcoming period.

Egypt signed a joint communiqué calling for ceasefire and supporting the Libyan House of Representatives last Monday. Shoukry discussed the importance of supporting “legitimate state institutions” in Libya with almost all of the ministers he met.