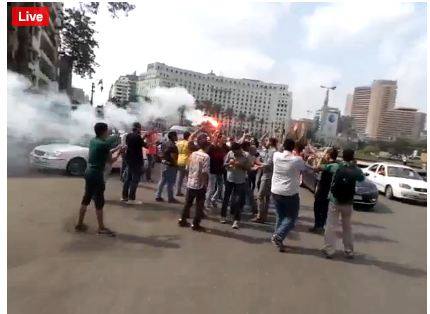 Students Against the Coup (SAC) movement members protested on Sunday morning against a visit by President Abdel Fattah Al-Sisi to Cairo University scheduled later on Sunday, where he is due to deliver a speech.

Mahmoud Al-Azhary, a spokesman for the movement in Al-Azhar University who took part in the protest said protesters gathered in Tahrir Square at 10am but were soon met with armed men in civilian clothing.

“We dispersed and left the square for the side streets,” he said. Al-Azhary added that none of the protesters were arrested.

Al-Sisi is expected to address in his speech his recent trip to the United States in which he took part in the 69th United Nations General Assembly and his meetings with world leaders, state-run television reported. He is also due to honour 20 students from 20 different public universities.

Al-Azhary said the group rejects Al-Sisi’s scheduled visit to the university after the “martyrdom” of several students “on campus at the hands of the security” in the past academic year.

The previous academic year saw numerous student protests, resulting in clashes between students and security forces on university campuses across the country.

According to the Association for Freedom of Thought and Expression, security forces killed at least 16 students inside university campuses over the past academic year. This includes six deaths at Cairo University.

Security forces have also detained hundreds of students throughout the year.

The new academic year was due to start on 27 September but has been postponed to 11 October. The second semester last year was postponed twice, beginning a month late.

On 31 August, Cairo University’s President Gaber Nassar told state media that politically affiliated student groups and activities will be banned from campus with the start of the new academic year.

Days later, SAC announced that it would hold more protests in the upcoming academic year across several government universities.