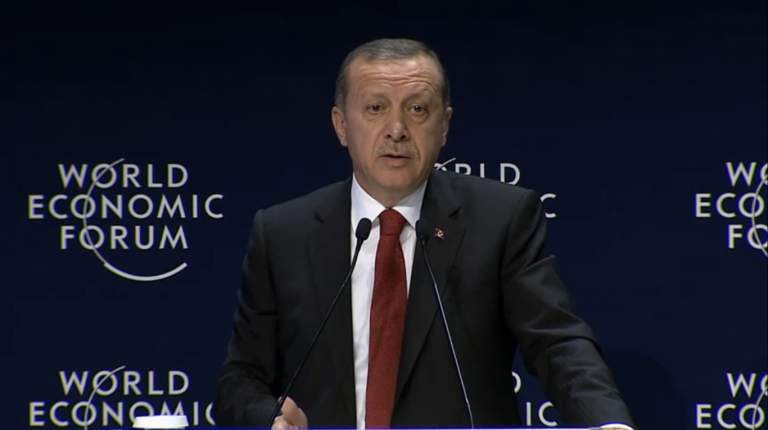 Egypt has responded to Recep Tayyip Erdogan’s latest swipe at the Egyptian government, saying that the Turkish president has continued a “series of exaggeration and lies” about Egypt.

In his keynote address to the World Economic Forum in Istanbul on Sunday evening, Erdogan once again questioned the legitimacy of the Egyptian government. The recently elected Turkish president said: “We see that in one country where the will of the people manifested itself, those who are elected with a vote of 52% are toppled by one of the ministers in the cabinet,” in reference to the ouster of former Egyptian president Mohamed Morsi. He added: “That coup is legitimised by the international community.”

The Egyptian foreign ministry responded to Erdogan’s comments on Monday saying that he is “not in a position to give lessons to others about democracy and respect for human rights and appoint himself the guardian of them”.

Erdogan has been highly critical of events in Egypt since the military-backed ouster of Morsi in July 2013, publically labelling it a coup on several occasions and raising his concerns with United States President Barack Obama. Then defence minister Abdel Fattah Al-Sisi announced Morsi’s removal following mass protests calling for the Islamist president to call for early elections. Al-Sisi won a landslide victory to become president of Egypt in June.

The ministry statement discusses “the reality of things in Turkey”, pointing out that Erdogan “did not hesitate to change the political system… and change the Turkish constitution in order to continue in power for ten years to come”. The ministry said that this “cannot be described as the behaviour of democrats”.

The statement continued to describe “restrictions of freedom of opinion of expression and assembly and the use of force in dealing with political activists and peaceful demonstrators”. The ministry emphasised Erdogan’s decision to block access to social media website Twitter in Turkey last year during anti-government protests, describing it as “blatant defiance of the most elementary rules of respect for freedom of opinion”.

The Egyptian ministry also pointed out restrictions on media in Turkey, “discrimination against Kurds, frequent intervention in the work of the judiciary” and the detention of “citizens without charge for long periods of time”.

Erdogan’s comments “reflects the perspective of Mr Erdogan’s narrow ideological orientations, which is linked to intellectual  and personal ambitions and illusions of the restoration of the Ottoman Empire”, according to the Egyptian ministry.

This is the second time in less than a week that Erdogan has commented on Egypt, prompting a reaction from the foreign ministry. The first incident occurred at the United Nations General Assembly, where he also questioned the legitimacy of the Egyptian government. On Sunday evening Erdogan asked the World Economic forum: “Is the UN the place where people who plot coups speak?”

Erdogan’s comments at the UN last Thursday have been condemned as interference in Egypt’s internal affairs by the United Arab Emirates and the Secretary General of the Arab League.

Egypt and Turkey downgraded diplomatic ties last November with both countries, expelling the other’s ambassador labelling them “persona non-grata” following another outburst of criticism from Erdogan.

During Morsi’s tenure, relations between Egypt and Turkey strengthened politically and economically. The two countries coordinated in response to regional crises such as the Syrian conflict and the Middle East peace process. Cairo and Ankara also signed more than 25 bilateral cooperation agreements covering several areas, including business, trade and tourism as well as a cumulative $2bn support agreement to help support Egypt’s economy.