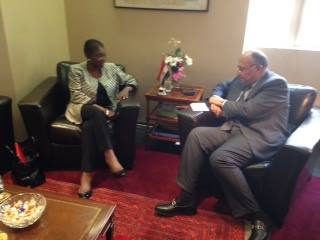 At the request of Amos, Shoukry addressed Egyptian efforts to maintain the ceasefire between the Israeli and Palestinian sides in the Gaza Strip, a statement from the foreign ministry said.

Palestinian factions and Israel ended 50 days of fighting through an Egypt-brokered ceasefire on 26 August.

The Egyptian foreign minister also addressed Egypt’s efforts to work on “ending the Israeli siege on the Gaza Strip”. The strip, which is home to 1.8 million people, has been under siege since 2007, when Hamas seized control of the densely populated strip after a dispute with Fatah.

Shoukry also discussed with Amos the ongoing preparations for the Gaza reconstruction conference which is being organised by Egypt and Norway and will be hosted in Cairo on 12 October. It is being organised in coordination with Palestinian Authority President Mahmoud Abbas, who has given his support to the conference.

Shoukry and Amos met at the sidelines of the 69th United Nations General Assembly on Sunday.

On Saturday, Shoukry and Norwegian Foreign Minister Borge Brende met, also at the sidelines of the UNGA, and said they expect the 12 October conference on the reconstruction of Gaza to have “a great level of participation” and “success”.

The two foreign ministers also discussed details on how the conference will be organised. Brende made a trip to Cairo earlier this month to discuss Egypt’s role in maintaining the ceasefire in Gaza.

In addition to the Gaza Strip, Shoukry and Amos also discussed the humanitarian situations in Syria and Iraq, amid the “rising influence of terrorist organisations there, especially the Islamic State [formerly ISIS] and its effect on displacing hundreds of thousands of citizens in the two countries”.

They also addressed humanitarian conditions inside Libya in the light of the political and security developments.

Egypt has repeatedly expressed its concerns on the situation inside its neighbour Libya. Shoukry said last week at a high-level United Nations meeting on Libya that Libyans are facing a tough and imbalanced fight against armed groups and that the humanitarian and security situation have deteriorated due to violence.

After several meetings between neighbouring countries, the fourth meeting in Cairo on 25 August ended with putting forward the Cairo Initiative, which includes foundations for dealing with the situation in Libya.

Shoukry, however, said on Thursday that some actors inside Libya are refusing a ceasefire and invitations to talk.