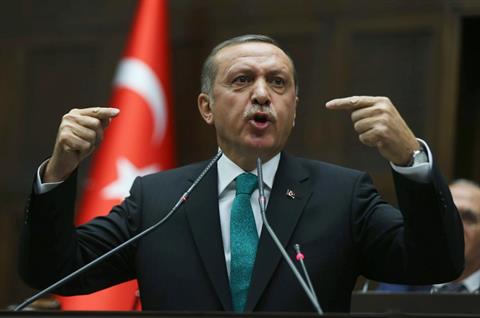 In reply to Egypt’s Monday statement that accused the Turkish president of lying and exaggerating, Turkey said that “none of these claims can be taken seriously or be accepted”, and announced its continued concern about human rights in Egypt.

The Egyptian foreign ministry had said that Turkish President Recip Tayyip Erdogan is “not in a position to give lessons to others about democracy and respect for human rights and appoint himself the guardian of them”.

A Turkish foreign ministry statement released on Wednesday said: “Relentless exclusionary and undemocratic practices still persist in Egypt… which trample human dignity, the will of the Egyptian people and its sovereignty “, referring to the forced dispersal in August 2013 of the Rabaa Square sit-in that had demanded the return of ousted president Mohamed Morsi, the “thousands” killed and “tens of thousands” arrested, and “hundreds…sentenced to death in groundless trials”.

The statement also referred to political parties, democratic movements and youth groups that have been banned “on arbitrary grounds”, and the dozens of journalists, including foreigners, that have been convicted in sentences “that are incompatible with the rule of law”.

Turkey said that reactions to such practices cannot be considered “interference in internal affairs”.

When it comes to human rights and constitutional legitimacy, Turkey, as other responsible members of the international community has an ethical, moral and legal responsibility for the provision of the most basic rights of the brotherly people of Egypt, added the Turkish statement.

Turkey also said that the administration in Egypt has not acknowledged Turkey’s “sincere” calls for a rapid transition to democracy in line with the will of the people in Egypt.

“As long as undemocratic practices devoid of political participation continue…Turkey’s calls for addressing the Egyptian people’s legitimate demands for democracy, equality, freedom and prosperity will continue, unless tangible progress is achieved”, said the Turkey statement.

Erdogan questioned of the legitimacy of the Egyptian government in his keynote address to the World Economic Forum in Istanbul on Sunday evening. On several occasions, Erdogan has referred to the military-backed ouster of Morsi in July 2013 as a “coup”.

The response in the form of a statement by the Egyptian foreign ministry discussed “the reality of things in Turkey”, claiming that Erdogan “did not hesitate to change the political system… and change the Turkish constitution in order to continue in power for ten years to come”. The ministry said that this “cannot be described as the behaviour of democrats”.

The Egyptian statement continued to describe “restrictions of freedom of opinion of expression and assembly and the use of force in dealing with political activists and peaceful demonstrators”. The Egyptian foreign ministry also pointed out restrictions on media in Turkey.

Egypt and Turkey downgraded diplomatic ties last November, with both countries expelling the other’s ambassador, labelling them “persona non-grata” following another round of criticism from Erdogan.