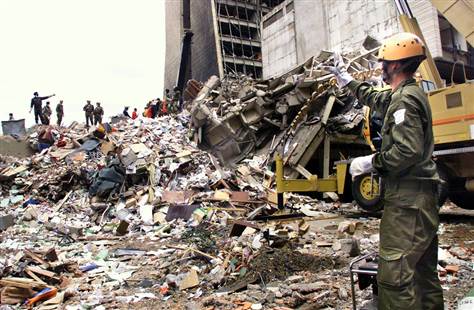 A New York court accepted Tuesday the guilty plea of Egyptian national Adel Abdul Bary, 54, who is being tried for the deadly twin bombings that targeted two US embassies in 1998.

On 19 September, Abdul Bary pled guilty on three counts and waived his right to appeal or challenge a sentence of up to 25 years in prison.

The US government agreed to dismiss the open counts against Abdul Bary, an agreement subject to the court’s approval.

The Egyptian national initially faced 308 counts, including “conspiracies to murder, bomb and maim” and 224 counts of “premeditated murder”.

Many of the counts he was charged with required life sentence convictions, but the agreement and guilty plea, which District Judge Lewis A. Kaplan accepted, limit the amount of jail time Abdul Bary can be sentenced to.

Abdul Bary was allegedly involved with Al-Qaeda in the 1998 bombings of two US embassies in Kenya and Tanzania. The twin bombings were executed using bombs attached to cars, and left 224 dead.

Kaplan addressed the “concern that the resulting agreement would be too lenient” but found that the “charges to which the defendant has pled guilty adequately reflect the seriousness of his actual offence”.

Kaplan set the trial date for handing Abdul Bary a verdict for 12 January.

The US government informed the court that the time Abdul Bary had already spent behind bars is likely to be discounted from his sentence.

This means that If sentenced to 25 years, Abdul Bary will likely remain in prison until the age of 64, since he has already spent more than 15 years in prison, most of which were in the United Kingdom. Abdul Bary was arrested in 1999 and despite challenging that verdict, was eventually extradited to the United States in 2012.