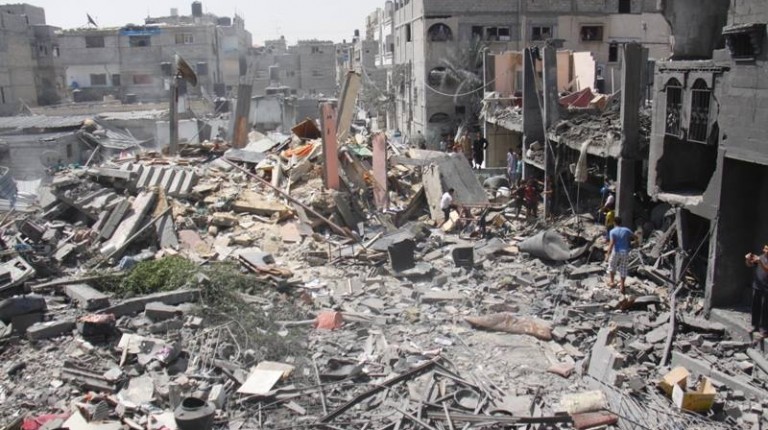 In a Sunday statement, HRW said Israeli restrictions on the movement of people and goods into and out of Gaza “harm people’s access to water, education, and other fundamental rights”. The statement added that imposed restrictions “hinder sustainable recovery” in the besieged Strip.

Whitson added that the United Nations Security Council should play an active role enforcing previous resolutions “ignored” by Israel. “The Security Council needs to condemn Israeli restrictions that are unnecessary for security,” she said.

The current land, air and sea blockade of the Gaza Strip has been enforced since 2007 when Hamas took control of government institutions. It has prevented agricultural and commercial goods, as well as food, fuel, medicine and other necessities from reaching Palestinians.

Egypt’s single border crossing with the besieged strip, the Rafah crossing, has been largely kept closed since 2007, which, according to HRW, “reinforces” the Israeli blockade.

According to a UN estimate, this summer’s hostilities “left 108,000 people homeless, completely destroyed 26 schools and 4 primary health centres, and destroyed or damaged 350 businesses and 17,000 hectares of agricultural land” in the Gaza Strip. The UN Development Programme added that unemployment, at 45% before Operation Protective Edge, climbed even higher.

In a statement last Tuesday, HRW alleged the present ceasefire agreement between the warring factions fails to address “the wider restrictions on the movement of people and goods imposed by Israel’s blockade of the Gaza Strip”. The statement also said there is “a near-total ban on exports enforced by both Israel and Egypt which has crippled the economy, and a prohibition on almost all Gaza residents moving to or even visiting the West Bank.

“There is no plan on the table that adequately meets the basic needs of Gaza’s population, much less envisions a sustainable Gaza that is not perilously dependent on foreign donations,” Whitson said. “Donors should stop acquiescing to unjustified Israeli restrictions and insist on reconstruction plans that can be reasonably expected to meet Gaza’s humanitarian needs.”

On 15 August, European Union Foreign Affairs Council said that the EU “remains concerned about the disastrous humanitarian situation in the Gaza Strip particularly the conditions of the displaced population, water supplies, electricity services, unexploded ordnance as well as destroyed and uninhabitable homes”.

The Foreign Affairs Council added that “a durable ceasefire must lead to a fundamental improvement in the living conditions for the Palestinian people in the Gaza Strip through the lifting of the Gaza closure regime”.