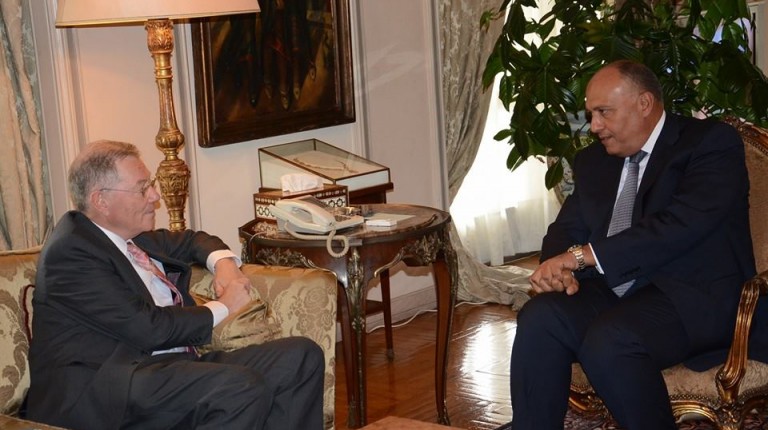 Foreign Minister Sameh Shoukry met with US Secretary of State John Kerry on Sunday to discuss a range of regional issues, focusing on the Gaza situation and the fight against terrorism.

Kerry arrived in Cairo on Sunday morning to attend the one-day Gaza Reconstruction Conference. A joint press conference of Shoukry and Kerry is planned later on Sunday at the end of the Gaza conference.

During Kerry and Shoukry’s meeting, the two ministers tackled the situation in Syria, Iraq, and Libya, with Shoukry stressing that terrorism poses a global threat. He also stated the importance of adopting a comprehensive approach to fight “takfiri ideologies” and cut off sources of funding of terrorist organisations.

According to a Saturday foreign ministry statement, Shoukry met with United Nations Special Coordinator for the Middle East peace process, Robert Serry. At the meeting, they discussed the latest developments in the Palestinian territories and the efforts by the Egyptian government to resume indirect negotiations between the Palestinians and Israelis.

A foreign ministry spokesman said the meeting included discussions on the importance of raising financial resources to rebuild areas destroyed during the recent Israeli military operations in the Gaza Strip.